T.I.’S DAUGHTER, HEIRESS HARRIS, PROVES SHE IS A DADDY’S GIRL IN HILARIOUS VIDEO 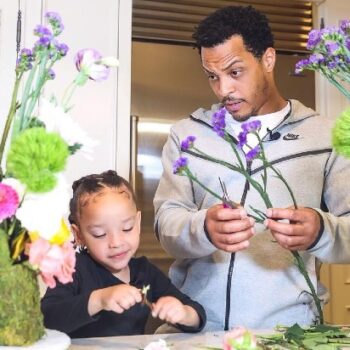 T.I.’s daughter, Heiress Harris, is an absolute daddy’s girl. The youngster was recently filmed while making a Mother’s Day present for her mom with her father, T.I.

Heiress was filming for her YouTube series, Heiress Does It All. The youngster greeted her audience and told them what she had planned for the episode. T.I. came sliding onto the scene during his daughter’s greeting but waited patiently for Heiress to formally introduce him to her fans.

“Today we’re going to be making my mom something for Mother’s Day,” Heiress told her YouTube supporters. T.I. took time to explain the importance of the arts and craft session to his daughter before the creative session began. “Now, baby, listen,” the rapper told his daughter. “I need you to focus,” T.I. said. “We have to make this very good because if it’s super good, then I don’t have to buy your mother anything. So please, let’s do good on this.”

Heiress agreed to put her best foot forward before sealing the promise with a high-five. The youngster later told the special guest who served as the instructor for the session that her father’s real name was “Tip” and not “daddy.” The youngster made it abundantly clear that only she had the right to reference her father as “daddy.”

“That’s daddy’s baby,” T.I. wrote in response to the video clip. “That little human is amazing,” another social media follower said. “She said that so respectfully,” one of Tip’s supporters added.

Heiress is T.I. and Tiny Harris’ youngest child. She came as a surprise to the celebrity couple who already parented six kids together before Heiress’s conception. Heiress was born on March 26, 2016, and has been the apple of her father’s eyes ever since.

“I can still remember how small you were when you were born (6-7 weeks premie)small enough to fit in my hand when you curled up,” T.I. said on Heiress’s third birthday in 2019. “You’re always gonna be Daddy’s Baby,” the celebrity father declared.

You can keep up with Heiress Harris by subscribing to her YouTube channel here.

The post T.I.’S DAUGHTER, HEIRESS HARRIS, PROVES SHE IS A DADDY’S GIRL IN HILARIOUS VIDEO appeared first on BCK Online.

T.I.’S DAUGHTER, HEIRESS HARRIS, PROVES SHE IS A DADDY’S GIRL IN HILARIOUS VIDEO