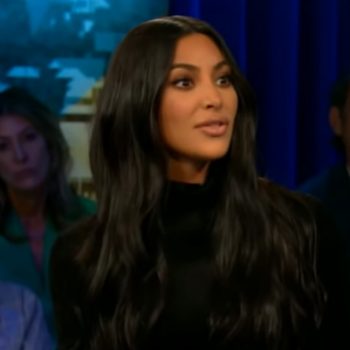 The college admissions scandal has everything, including Kim Kardashian West, talking. The Keeping Up With The Kardashians star tells Van Jones of CNN that she would not think of using her privilege to buy her kids’ way into college.

“If they couldn’t get into a school, I would never want to use privilege to try to force them into a situation that they wouldn’t thrive in anyway,” Kim shares. “So that’s where I just see that that’s not appropriate,” she adds.

I miss my babies! I took North with me to Montreal last week

The celebrity mom further explains, “I want my kids to be kind. I want them to be as grounded as possible. And to buy your way into something just wouldn’t benefit anybody.”

Several celebrity parents were arrested a few weeks back for manipulating the admissions process to ensure that their children were accepted into some of the most prestigious universities in the country. The University of California (USC) and the University of California in Los Angeles (UCLA) were two of many schools implicated in the scandal. Mossimo Giannulli and Lori Loughlin were two of several celebrity parents arrested and charged for their actions.

Spring Break is over

Kim Kardashian tells Van Jones that using her resources to put her kids in positions that they have not earned is not on her list of things to do. “I hope that they get inspired to know that they know they can put in the hard work, and even though I’m in my late thirties and I’m just finishing college, or attempting to do that now, it’s never too late, and there really is no easy way out,” the celebrity mom says. “I’ve always worked hard, and I hope my kids see that work ethic and want to do the same thing,” she concluded.

See how Kim Kardashian and Kanye West rear their kids on the family’s reality show, Keeping Up With The Kardashians, which airs every week on E!

The post KIM KARDASHIAN SAYS THAT SHE WOULD NEVER USE HER PRIVILEGE TO GET HER KIDS INTO COLLEGE appeared first on BCK Online.