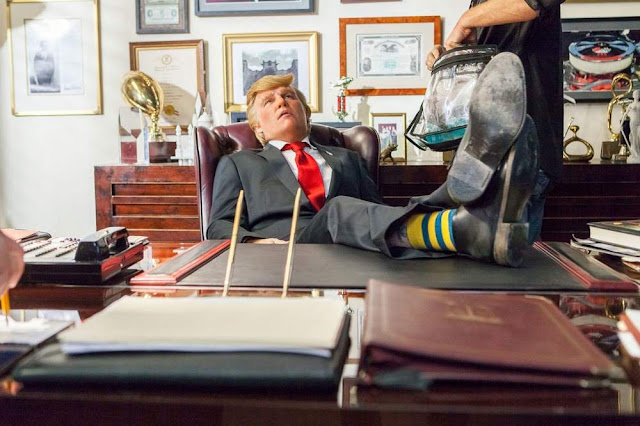 In the span of a single sentence, President Trump managed to flummox a nation.
"We've got to keep our Country safe," Trump said at a campaign-style rally Saturday in Melbourne, Fla. "You look at what's happening in Germany, you look at what's happening last night in Sweden — Sweden, who would believe this?"
Swedes, in turn, answered Trump's question with a question of their own: "Wait — what?"
On Friday night a few things did, in fact, happen in Sweden. A Stockholm newspaper helpfully laid out a few of them:
1-  Technical problems threatened to derail a performance by singer Owe Thörnqvist.
2-Harsh weather in the north of the country shut down a road.
3- A high-speed chase in Stockholm ended with the driver under arrest.
Aftonbladet listed a few more, to be sure — the trouble is, none of those events fits what Trump implied by including Sweden in a list of places that had recently suffered terrorist attacks.
"Sweden — they took in large numbers," Trump continued Saturday. "They're having problems like they never thought possible. You look at what's happening in Brussels. You look at what's happening all over the world. Take a look at Nice. Take a look at Paris."
The reaction
Shortly afterward Trump got a definitive response from Sweden — literally, as The Guardian points out, since one of Sweden's official Twitter accounts is controlled by a different Swede each week.
"No. Nothing has happened here in Sweden," tweeted Emma, the school librarian running the account this week. 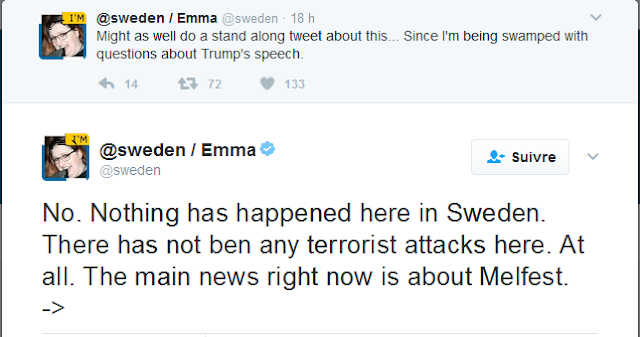 Former Swedish Prime Minister Carl Bildt's answer was a bit more blunt: "Sweden? Terror attack? What has he been smoking?" 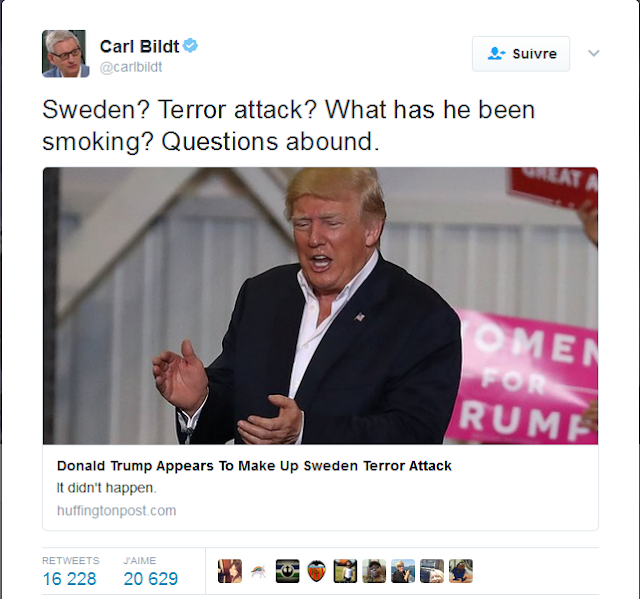 Naturally, the rest of the Internet was quick to let loose its seemingly never-ending store of snark and mockery. By Sunday, #SwedenIncident was trending on Twitter, as many tweeters the world over helpfully suggested ideas to jog the Swedes' memories of just what exactly happened Friday night. 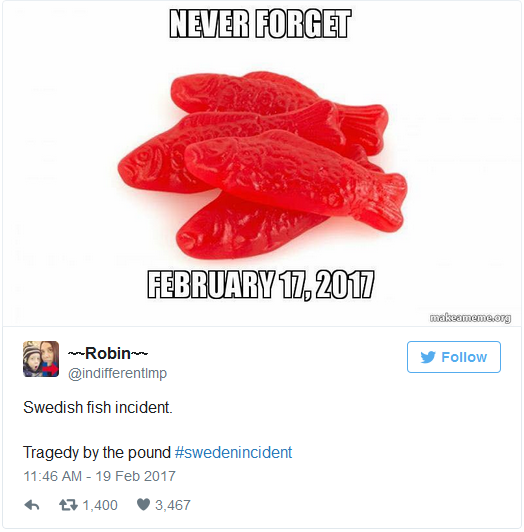 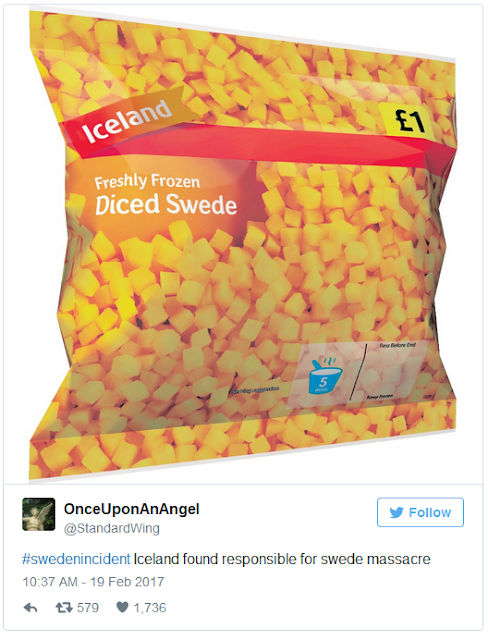 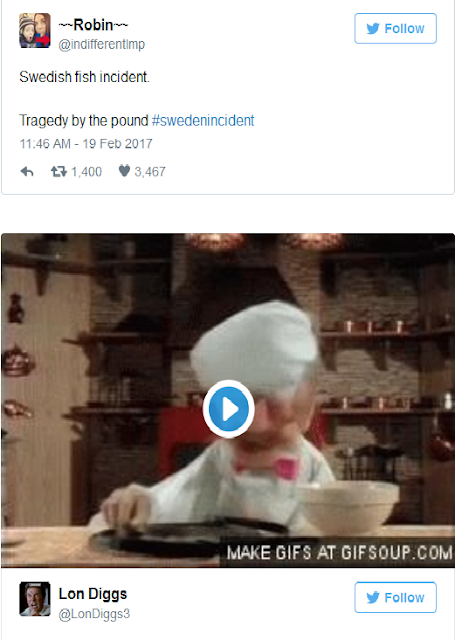 What the president might've been talking about
In all seriousness, though, some have sincerely conjectured about what Trump may have been referring to.
The Guardian, for instance, suggests Trump may have confused Sweden with the Pakistani town of Sehwan, where just days ago a suicide bomber brutally killed dozens of worshippers at a Sufi shrine.
Others, like The New York Daily News, posit that Trump was referring to an interview with filmmaker Ami Horowitz that aired Friday night on Fox News.

Whatever the right answer may be, the incident calls attention to a telling aspect of U.S. political life, as Swedish journalist Martin Gelin told NPR's Camila Domonoske: Sweden can be a kind of Rorschach test in American politics, which inspires different reactions depending on where one's beliefs fall on the political spectrum.
"The left really admires Sweden, and the far right views Sweden as a nightmare," Gelin says.
Recalling his own experiences while reporting in the U.S., Gelin notes that the different opinions he saw between progressives and conservatives were usually tied to the issues they're most concerned about.
"Conservatives, especially from the far right, know that Sweden has welcomed more refugees than almost any other country in Europe, especially in proportion to how small the country is. Many of them have heard erroneous or heavily exaggerated stories about increases in crime and arson and things like that.
"But on the left, you have the completely opposite view of Sweden as a progressive paradise, especially among Bernie Sanders supporters. I've heard a lot of people talking about Sweden as the country that they wanted to emulate."
As The New York Times reports, citing the Swedish Migration Agency, the country "processed 81,000 asylum seekers in 2014, 163,000 in 2015 and 29,000 last year, with another 25,000 to 45,000 expected this year."
The most recent terrorist attack in Sweden, according to The Associated Press, happened in 2010, when an Iraqi-born Swede carried out a suicide bombing, injuring two people and killing only himself.