Back in 2009 a friend lent me a beautiful Spinning Wheel as I had been using the guild wheels up till then. Its a lovely wheel but we never really gelled as a team and within six months I had bought the Sonata.

Over the last couple of years or so she has simply been gathering dust and all attempts to give it back to the owner have been met with 'I don't want it back, pass it on'

I have reached the stage where she is simply taking up space in my room so she has been passed on to another spinner who has promised to love and cherish her.

So I bid a fond farewell to this lady. 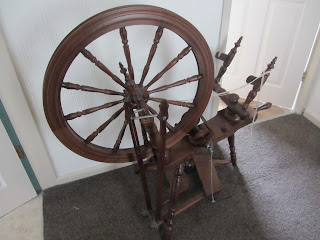 In my search for the bobbins, one of which had some spinning on it which closely resembled string! I found another 4 bobbins with yarn on them. The full one in the middle is the remainder of a mule fleece, the coloured one is a merino mix, the badly spun one may be Shetland and I haven't a clue about the other. I suspect that they are all from about 4 years ago but I will ply them separately  and see what I get. 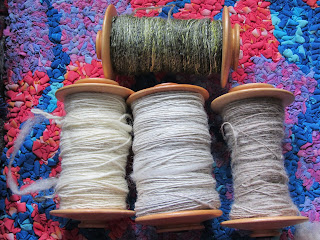 that's a job for today along with skeining up these three which I spun on holiday, Dorset poll lamb, Ryland and the unknown breed. 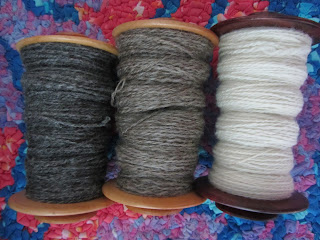