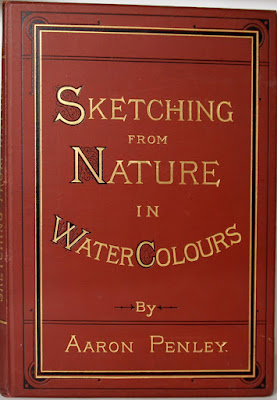 Aaron Penley (British, 1807-1870) wrote an early book on watercolor Painting. One of the principles he believes in is creating a sense of depth in a painting.

"One of the first essentials in Landscape Painting is the proper management of the sky, which should be made to retire, not appearing as colour or paint, but as air. It should be a representation conveying the idea of vacuity or space and not of surface, A clear and open sky is not, as the mere sketch would render it, blue colour, but rather a tone of the purest and most perfect character, into which the gaze can be made, as it were, to pierce ; and this cannot be effected by a simple wash of Ultramarine or Cobalt."

In other words it's easy to make a painting look like paint. It's much harder to make the surface disappear and to create miles of depth.

Antique Rug Bazaar Orientalist Painti…
Can I consistently feel better?
CBD 2020: What to Expect + Our Top Pr…
15 stylish homes with modern interior…
Simple Tips To Increase Self-Esteem
When painting outdoors on partly cloudy days, the sun will spotlight some areas and other areas will drop into shadow. But you have to decide what effect you want to feature—and remember it— even as other exciting possibilities emerge.
As Penley puts it, the artist "must take cognizance of different effects as they pass over the scene, and never lose sight of the impressions then so strongly made upon their minds."
Or as contemporary painters often put it, "Don't chase light effects."
From "A system of water-colour painting : being a complete exposition of the present advanced state of the art, as exhibited in the works of the modern water colour school" by Aaron Penley free on Archive.org.