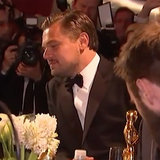 [email protected] gets his Oscar engraved at the Governors Ball: "Do you do this every year? I wouldn't know." #Oscarshttps://t.co/3dBRsS1FQ4

It's no secret that Leonardo DiCaprio's tortuously long hunt for an Oscar has inspired an endless amount of hilarious jokes over the years, and it certainly hasn't been lost on the actor. After finally winning his first Academy Award on Sunday night for his role in The Revenant, Leo got in a few jokes of his own while getting his shiny new trophy engraved at the Governors Ball. "Do you do this every year? I wouldn't know," he said to the woman carving away at his statue, laughing. "Do I have to take care of it? I have to maintain it?" Watch the cute video above, then check out the most hilarious Internet reactions to the show!