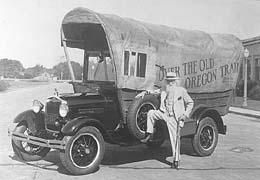 In 1852 an estimated 50,000 pioneers passed Independence Rock on their way west. Among this number was the family of 21-year-old Ezra Meeker, recently of Eddyville, Iowa, but natives of Indiana. Meeker, his wife Eliza, and their infant son, arrived at Puget Sound, Washington Territory, in October 1852. They eventually settled in the Puyallup Valley, where over the years they experienced success and failure in farming, principally in raising hops.
Keenly aware of the national significance of the Oregon Trail in the development of the American Pacific Northwest, Meeker wrote several books on the subject. In 1906, greatly concerned that the Oregon Trail would fade from memory, he decided to retrace the old trail eastward with covered wagon and ox-team, for the purpose of permanently marking the trail. He called this the Ox-Team Monument Expedition.
The presence of the 75-year-old pioneer with his long white beard, his considerable promotional skills, and the enthusiasm he engendered brought about a generous response from communities along the old trail. As a result, a line of stone monuments now marks the course of the trail from The Dalles, Oregon, across the mountains and plains to Kansas.

Here at Independence Rock he wrote:
July 3, 1906, We drove over to the 'Rock', from the 'Devil's Gate', a distance of six miles, and camped at 10:00 for the day...I selected a spot on the westward sloping face of the stone for the inscription, "Old Oregon Trail, 1843-57", near the present traveled road, where people can see it...and inscribed it with as deep cut letters as we could make it with a dulled, cold, chisel, and painted, with sunken letters with the best of sign writer's painting oil. On this expedition, where possible, I have in like manner inscribed a number of boulders, with paint only, which, it is to be hoped, before the life of the paint has gone out, may find living hands to inscribe deep into stone; but here on this huge boulder, I hope the inscription lasts for centuries.

Meeker continued his 1906 odyssey through major eastern cities to Washington, D.C., where on November 29 he met President Roosevelt. In subsequent years Meeker continued his promotion of the Oregon Trail. In 1916 he made the journey in a Pathfinder model automobile, and in 1924 he was flown over the trail by army pilots. The old pioneer died in Seattle, Washington, at the age of 97 on December 3, 1928.
This is part of your American heritage, Honor it, protect it, preserve it for your children.

The most Convenient and reliable Money Transfer Services