Euro 2016: France beefs up security ahead of final match 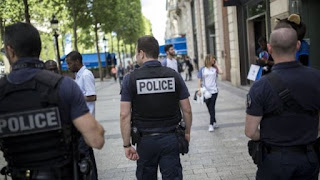 More than 5,000 French Police will be deployed at key venues in and around Paris Ahead of the Euro 2016 football final between France and Portugal.

Officials say the police will patrol the Stade de France stadium as well as the Fan Zone near the Eiffel Tower and the Champs Elysees boulevard.


But there will be no victory parade if France win, the officials warned.

Police and the army have been patrolling Paris since last November's attacks in which 130 people died.

Jihadist gunmen and suicide bombers attacked a number of venues, including the Stade de France.

Euro 2016: France beefs up security ahead of final match