Boris, Gove and an 'act of treachery' 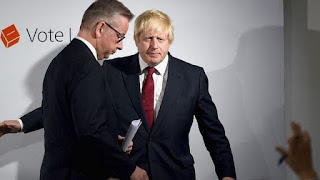 Less than a week ago he was the victor in a Campaign he didn't expect to win, a campaign that led the country to make its biggest political decision for decades.

This Morning, after what one of his allies described to me as "one of the biggest acts of treachery I have ever seen", Boris Johnson has decided he is out.

The decision of Michael Gove, the secretary of state for justice, to run against his political ally changed everything.

Boris Johnson was stunned and furious, with Michael Gove only phoning him to tell him, I'm told, five minutes before he made the announcement.

One of his cabinet colleagues says: "He loves to be loved - he really feels everything."

Another said: "He is a very human politician. This was clearly going to hurt".

On hearing of the news, a source close to Mr Johnson told me: "We might not get the numbers now."

And that was written on his face this morning as he took his place at the podium to the cheers of his supporters. But as he gave an unusually low-key speech, it became clear that something was amiss.

But there were tears and disbelief in the room as the news sank in.

Political rules have been totally thrown up into the air in the last seven days, but one of the oldest has stayed true - the front-runner doesn't win.

Through the day we'll hopefully be able to piece together more clearly exactly what happened.

There are suspicions across Westminster that George Osborne and David Cameron's ambitions to stop Boris Johnson are behind this.

It won't be clear for some time, if ever, if that is really the case. But two things are clear already - the chaos of this morning is a bonus for Home Secretary Theresa May's (so far) calm campaign, and the aftermath of the referendum has poisoned new seeds of bitterness inside the Conservatives.

Boris, Gove and an 'act of treachery'