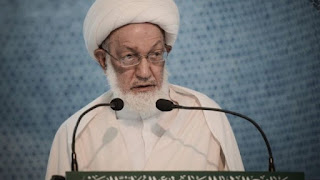 Bahrain has stripped the Sunni-ruled kingdom's most prominent Shia cleric of his citizenship.
An Interior Ministry statement accused Sheikh Isa Qassim of using his position to "serve foreign interests" and promote "sectarianism and violence".

The cleric, who holds the religious rank of ayatollah, has backed protests led by the majority Shia community for greater civil and political rights.

A senior Iranian figure has condemned the action against the cleric.

It comes days after Bahrain's government suspended the leading Shia opposition grouping, Wefaq National Islamic Society, closing its offices and ordering its assets to be frozen.

Wefaq's political leader, Shia cleric Sheikh Ali Salman, is in prison and recently had his jail term increased to nine years, after being convicted in 2015.

A US diplomatic cable published by Wikileaks described Sheikh Isa Qassim as Wefaq's spiritual leader. He is also regarded as the spiritual leader of Bahrain's wider Shia community.

The US cable said the cleric had studied in the Iranian city of Qom in the 1990s and also spent time in the Iraqi city of Najaf, another centre of Shia learning.

Announcing the move to strip him of his Bahraini citizenship, the interior ministry said the cleric had "adopted theocracy and stressed the absolute allegiance to the clergy".

It added that he had been in continuous contact with "organisations and parties that are enemies of the kingdom".

The influential commander of Iran's Revolutionary Guards' Quds Force, Gen Qasem Soleimani, is reported to have said Bahrain had crossed a "red line" with its "aggression" against the ayatollah.

In a statement carried by Iran's semi-official Fars news agency, he said the Bahraini people would "have no choice but armed resistance".

The UN's universal declaration of human rights says everyone has the right to a nationality.

But Bahrain's citizenship law allows for the cabinet to revoke the citizenship of anyone who "causes harm to the interests of the kingdom or behaves in a way inimical with the duty of loyalty to it".

Human Rights Watch says more than 200 Bahrainis were stripped of their citizenship last year, in some cases making them stateless.

Those involved may appeal against the decision, but the human rights group says Bahrain's courts "appear to grant the authorities absolute discretion" in such cases. 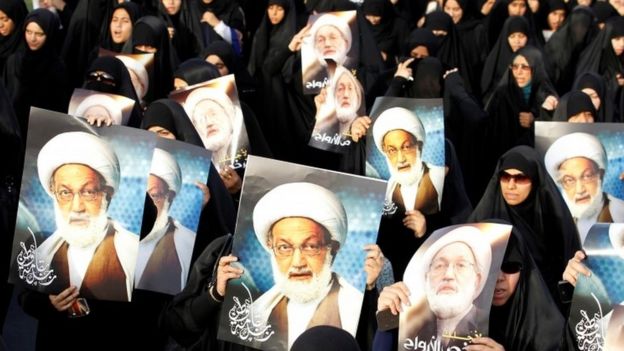 Ayatollah Qassim was born in Bahrain and activists say he does not hold any other nationality.

Hussein Abdulla, executive director of campaign group Americans for Human Rights and Democracy in Bahrain, called the move to revoke his citizenship "an unprecedented low for the Bahraini authorities".

British-based campaign group, the Bahrain Institute for Rights and Democracy, said it was concerned the action would "escalate tensions on the streets and may even lead to violence".

Human Rights Watch said it took the country "into the darkest days" since 2011, when demonstrators took to the streets to demand greater political rights and an end to discrimination against the Shia majority.

Opposition activists say dozens of people have been killed in ongoing clashes between protesters and security forces, while bomb attacks blamed on Iran-backed militants have left a number of police officers dead.

This post first appeared on Quest Times, please read the originial post: here
People also like
A Guide To Visiting Antigua, Guatemala: The Best 5 Things To Do And See
Chuck Rock Game Comparison
How come so many Christians don’t really know God?