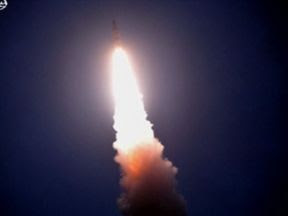 
The missiles were fired from areas around Hwangju county, in North Hwanghae province, towards the Sea of Japan, South Korea's military said in a statement.
Officials said the launch was believed to be of mid-range Rodong missiles, and flew about 1,000 kilometers (620 miles) "without giving any prior navigational warning."
CNN News