Tricycle driver stabbed in the head in Abuja 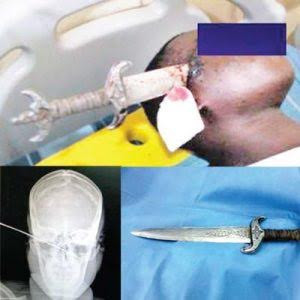 Muhammad Kabir, a 35 year old Keke Napep driver, was Stabbed in the face by a man who pretended to be a passenger but was actually a robber who wanted to steal his tricycle.

Muhhammed who is presently lying critically ill at an Abuja hospital, told TheSun that he had picked up the man along the road and was taking him to Masaka, a suburb of Abuja when the robber struck

"As we approached the man’s destination, I asked for the transport fare of N300.00, which we had earlier agreed on. He dipped his hand into his pocket and what he brought out baffled me. Rather than give me the transport fare, he stabbed me with a dagger, thinking that I would fall off the motorcycle and he would take it away.”

Muhammed's brother, Mustapha who is at the hospital with him, said

“Alas, my brother did not fall off the bike, but instead he rode on with the long dagger stuck in his head.”

Paasersby were quick to help him after they found blood gushing through his face.

“He was later taken to Pan Raf Hospital, Nyanya, where doctors led by one Dr. Odia and other members of staff battled to save his life, through emergency care. When he appeared to have stabilized, the doctors referred him to another hospital for proper management and care.

“An X-ray of the skull showed the dagger had gone in from the right side of the face just in front of the ear and was nearly poking out from the cheek on the other side,” a source at the hospital said.

Tricycle driver stabbed in the head in Abuja