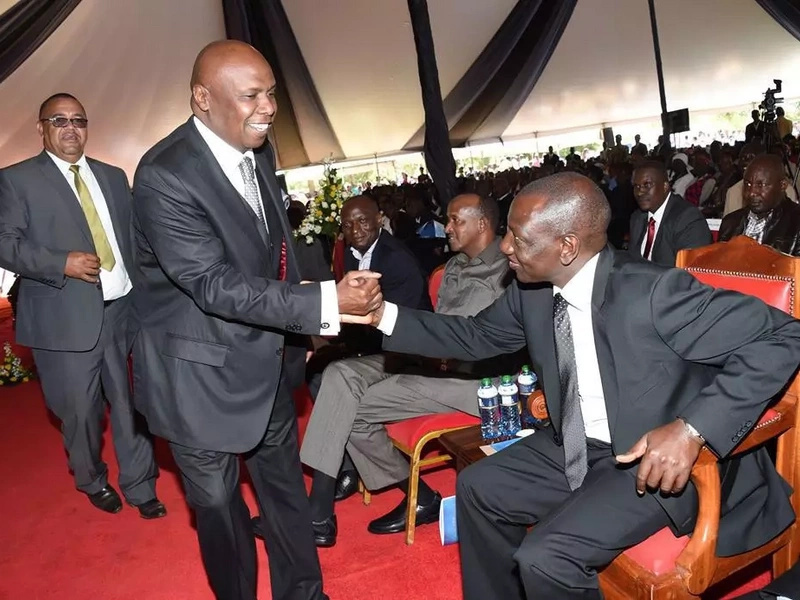 – Deputy President William Ruto has been faulted for claiming that voting for Kanu candidate Paul Sang in the March 7, Kericho senatorial by-election would see the county go to the opposition
– Kanu Chairman Gideon Moi said Ruto’s statement was misleading as the party signed a memorandum with Jubilee coalition partners that formed the government after the 2013 general election
Deputy President William Ruto has been accused of lying to Kenyans in order for his candidate to win Kericho by-election.
Baringo Senator Gideon Moi, on Sunday, February 28, said Ruto’s statement that voting for Kanu candidate in the Kericho by-election would lead the county to the opposition was false.

“For those in doubt, I want to state categorically that Kanu signed a memorandum with Jubilee coalition partners that formed the government after the March 4, 2013 general election,” said the Kanu chairman as quoted by The Standard.

Gideon Moi and Kanu secretary general Nick Salat indeed signed a post election deal with Uhuru and Ruto on April 3, 2013.
Read also: Uhuru and Ruto under threats from Waiguru -Murkomen
He was campaigning for Kanu candidate Paul Sang whose main competitor in the Kericho by-election is JAP’s Aaron Cheruiyot. The former minister in retired president Daniel Moi’s regime came second in the 2013 senatorial race while Cheruiyot is making his debut in the county politics.
Jubilee is under pressure to retain the seat that fell vacant following appointment of Charles Keter as cabinet secretary for energy. Several political leaders, including members of Ruto’s URP party, have declared support for Sang’. Amani National Congress Musalia Mudavadi and teachers in the county have also backed the Kanu candidate.
However, according to an opinion poll conducted by East Africa Dataline Consult, Jubilee’s Cheruiyot would win the March 7 senatorial race by 53% followed by Sang’ with 42%.
In Malindi parliamentary race, the poll indicates that ODM candidate Willy Mtengo will get 54% of the votes while Jubilee’s Philip Charo will get 33%.Murkomen