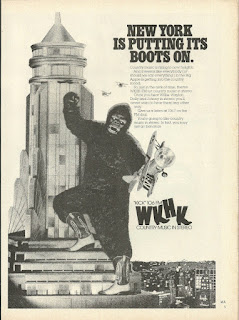 I really don't care for Leonard Maltin. He's a movie guy, when he moonlights in radio he's out of his element. We can discuss his syndicated radio program, "Leonard Maltin on Video" some other night. But 4 days' ago he wrote up an update on a cold case in Radioland that was actually broken by Martin Grams Jr. [SOURCE] It was news to me. It's about the 15-part radio serialization of King Kong from 1933:

"The adaptation was handled by William S. Rainey, who was hired to adapt the screenplay and/or novelization into 16 chapters, each running 15 minutes in length. For the most part, Rainey remained faithful to the material...  Alois Havrilla, the director of the serial, was an accomplished radio announcer in his own right and it appears he also doubled for roles of natives, sailors and spectators."

The King Kong character was conceived and created by filmmaker Merian C. Cooper and script writer R.H. Edgar Wallace. Wallace wrote the initial 110-page draft for King Kong in about five weeks, from late December 1931 to January 1932 under the working title "The Beast." (Coopers input was mostly to steer Wallace so he could re-use existing RKO footage.) But then Wallace died of pneumonia in February of 1932.  Ruth Rose then developed the script from Wallace's rough draft with input from Cooper and co-director Ernest Schoedsack. Script-writer James Ashmore Creelman was brought into "tidy up." But that's not the whole story.

In December of 1932, the story was "novelized" by Delos W. Lovelace and published by Grosset and Dunlap. In October 1933, Cinema Weekly published the short story "King Kong", credited to Edgar Wallace and Draycott Montagu Dell. Walter Ripperger wrote a two-part serialization of the tale for Mystery magazine in March of the same year. All of this was before or concurrent with the screenings of the feature film. So it comes as no surprise that RKO might use radio as further promotion for that movie.

No surviving recordings are known to exist. (That one you found on Archive.org is from a 1963 kids record.) However a collector has unearthed originals of all 15 radio scripts. Originally planned for 16 broadcasts, a major earthquake pre-empted one episode leading to a major rewrite combining parts of episodes 5 and 6. In early screenings the audio was broadcast over WEAF,  WJZ, and the KECA. The only original audio that is known to exist is a 7 minute promo for the RKO film.