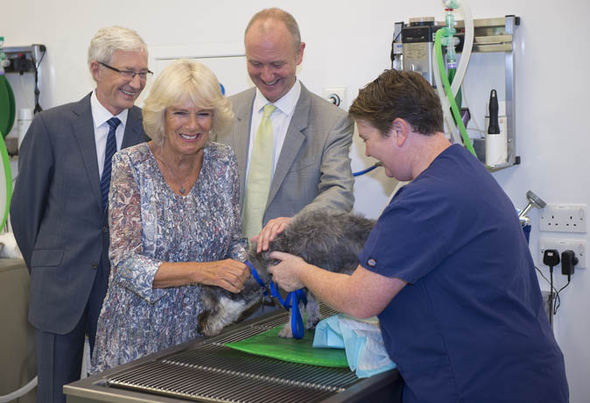 Camilla, 69, went to the home to officially open its new veterinary hospital and centre of excellence and was greeted by a canine

guard of honour featuring Winston and several other pooches, including two eight-week-old Staffordshire Bull Terriers, Bentley and Bailey, brought in when a day old with their mother, Bertha, a stray.

The Duchess, who adopted two female Jack Russell Terriers, Beth and Bluebell, from Battersea in 2011 and 2012, after two earlier visits to the venerable home for lost and homeless pets

, was sorely tempted to take at least one extra companion home for them.

Founded in 1860, Battersea aims never to turn away a dog

in need of its help.

and more than 3,000 cats across its three centres in London, Old Windsor in Berkshire, and Brands Hatch in Kent.  Click link for full post from EXPRESS.

About William and Kate

The FTC requires the following disclosure statement regarding ads: This [blog] post contains affiliate links which means I may receive a commission if you click a link and make a purchase