Kuczynski's pieces speak to me unlike any other art I have experienced so far. It's satirical messages make the viewer reflect on life itself and shows us a new perspective clearly thought out. 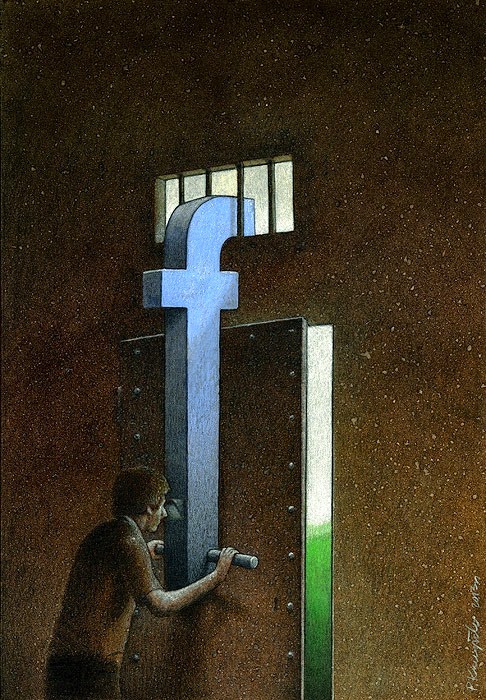 Here, he makes fun of the Social Media website, Facebook. Facebook has become a popular website throughout the years, but the popularity has decreased in my town around my peers. Facebook is an addiction. It leads to procrastination and drama. Kuczynski paints this picture on the left to represent that through Facebook we do things we are able to do in the outside world but we don't take the chance to. Clearly there is an opportunity waiting for the boy outside the opened door, he is not trapped inside, yet it is easier for him to view through the looking glass than to feel uncomfortable in reality. I think this also relates to how some people hide behind their computer screens rather than to face reality. It's so easy to catch up to people because of the convenience of social media, but at what point is it too convenient. If the boy just stepped outside the contrast from outside that place than in his viewing glass would be completely different, and the view would be greater than anything through a screen. 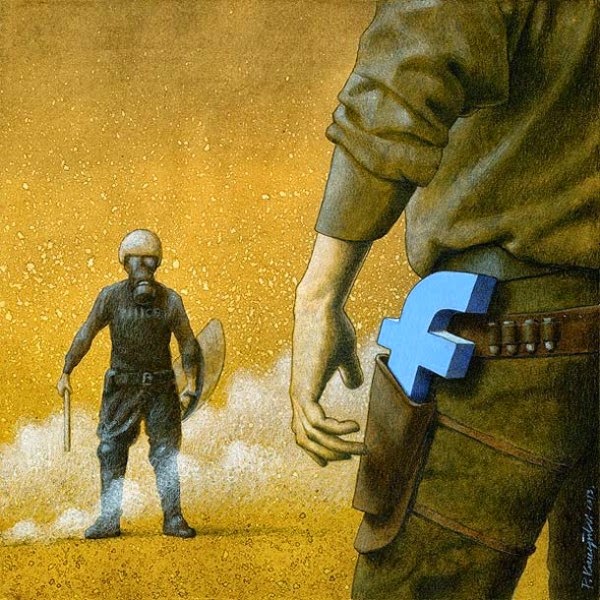 Facebook can be a war zone, when used with hate and disrespect. As a teen I have viewed Facebook as both situations shown here. People share too much. Yes, it's cool that you went on a vacation out of the country, but no I don't care that you woke up late today. People feel the need to share anything and everything with their world of friends. Most of the time it just creates drama that turns into a drastic battleground full of cyber-bulling shooting at random targets. There is no need to share every single detail of your life. If so, write an autobiography. 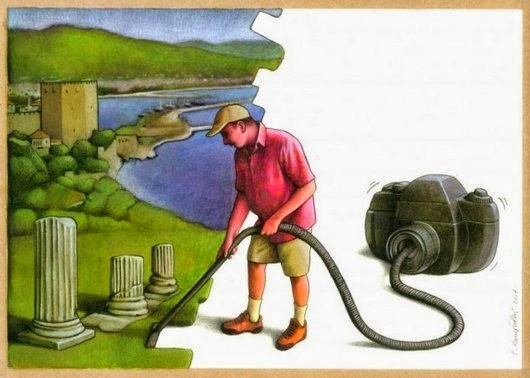 I think this piece speaks to me as I am also a photographer. The photographer in this work is vacuuming the whole land to store the picture in this camera, yet the view in the camera is never as good as the view from the naked eye. This reminds me of a story I read during the PSAT about how a viewer may look at the Grand Canyon (or any other national landmark) but is still unable to see it's real beauty because the suspense is absent because the viewer saw a better picture in a photograph (that may or may not be edited). 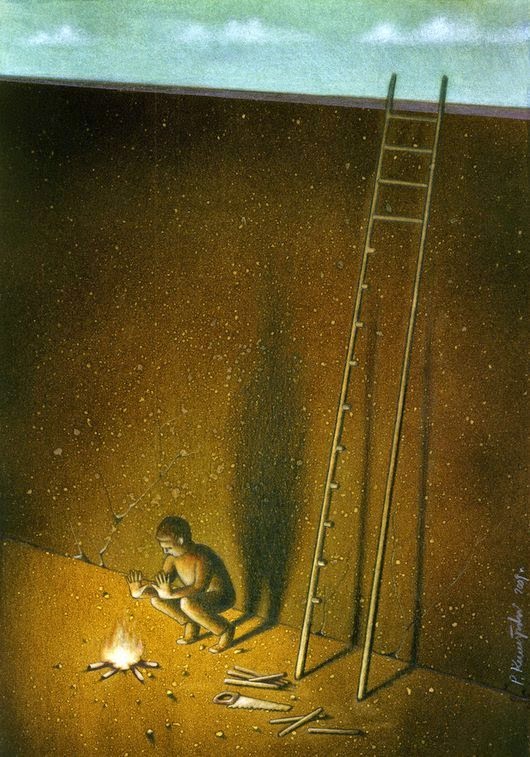 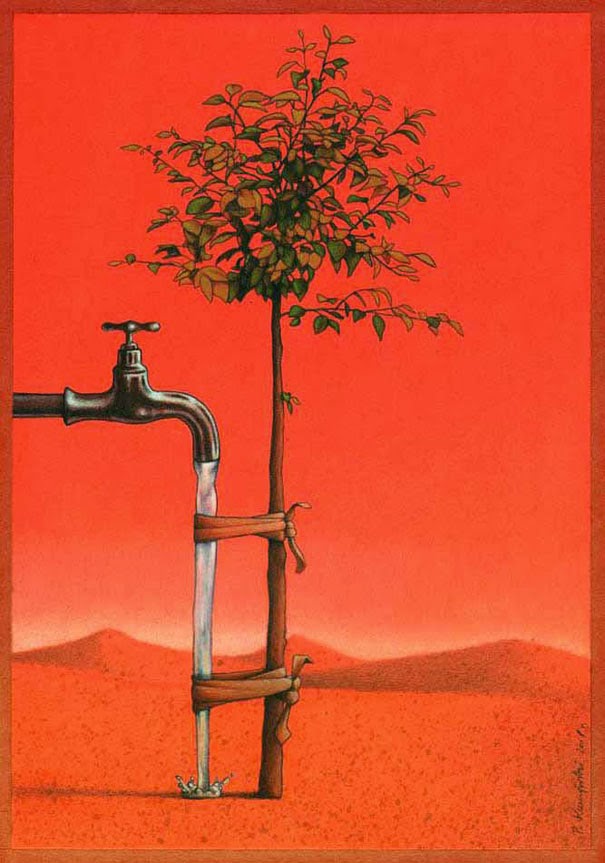 This picture tells me: The less people think the further we are from saving ourselves. The boy is trying to survive and stay warm from the fire. He also hasn't though of multiple solutions to staying alive. Closing off the brain to multiple ideas are blinding the brains way of fixing a problem that could be solved in a more rationalized way. The more the boy is concerned about warmth, the more steps he cuts from the ladder, furthering his distance from the top and escaping. 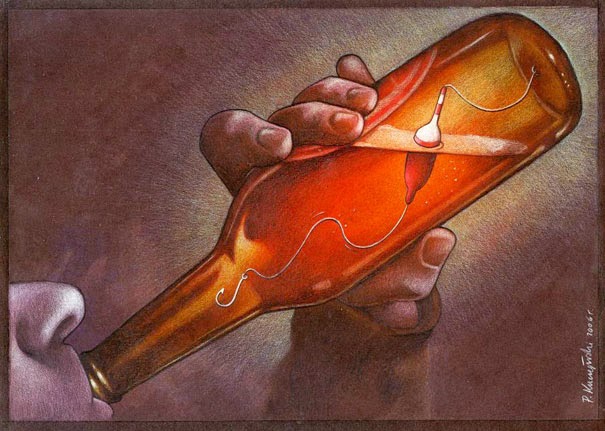 Alcoholism is an addiction I have researched for a future piece I may work on. Kuczynski shows how drinking will lead to death (the fishing hook as the human is a fish). It's a metaphor. The more the human will drink the lower the bobber will sink and the hook will be attacked to the mouth signifying a death as when someone catches a fish. It may not but it certainly will lead to stupid reactions that better the chance of death. To the right here, portrays the connection the tree has to the water. Without the water the tree will die and become like the rest of the land, barren. By the way it is tied to the water it looks as if it weren't running the tree would fall over. I like this piece because it clearly represents the connections of what it needs for survival. 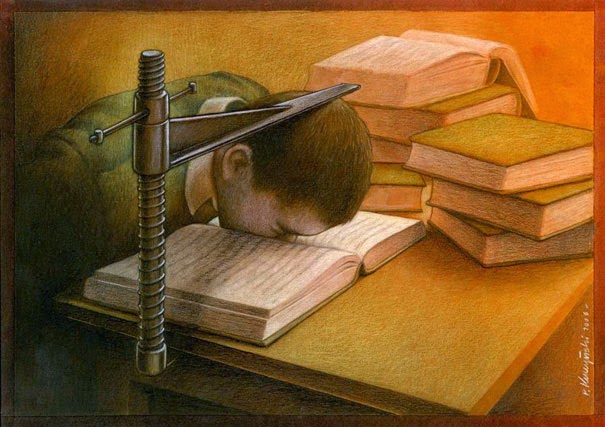 This picture represents me and all my peers in high school. Always having our faces forced on a book concerned for our grades and what the future will have planned for us. Knowledge is power. And Kuczynski's pieces are brilliant.


This post first appeared on { Canon-to-Canvas }, please read the originial post: here
People also like
Things to Do in Cannon Beach in the Winter
Mr Lenzo – Jackie Chan
Buying Tickets For the Eiffel Tower in Las Vegas
Biden-Harris Administration Invests More Than $37 Million to Improve Recreational Sites and Cabins on National Forests and Grasslands
Durham and St Cuthbert – The Cathedral