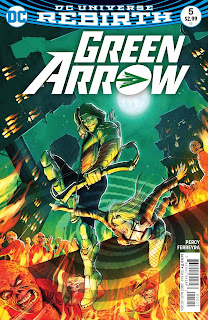 The End is the Beginning

Green Arrow has been one of my favorite Rebirth books and I have really enjoyed how Ben Percy
has dismantled Oliver's world, but that's nothing to watching him slowly get it back.  Where he bought friends and family in the past, he now has to do it the old fashioned way, earn it.  Hey, it worked for Smith Barney, why can't it work for Oliver Queen?  All of that has lead him to a full out assault on the Inferno and that's where we left off last issue and where we begin in this one.  Is it any good?  Let's find out...

The issue begins with Oliver and Company (I love writing that!) still heading towards the Inferno while Danted monologues to Black Canary about the greatness of fire.  The guy is a bit obsessed, but catches the reader up and promises Canary that she will be joining the ranks of the Burned soon enough.  Unfortunately, he has a meeting to attend so he leaves the conversion to Shado and Emiko.

By this time, Oliver and Diggle have reached the Inferno and Diggle has found himself a disguise that will allow him to attend said meeting while Ollie listens in. 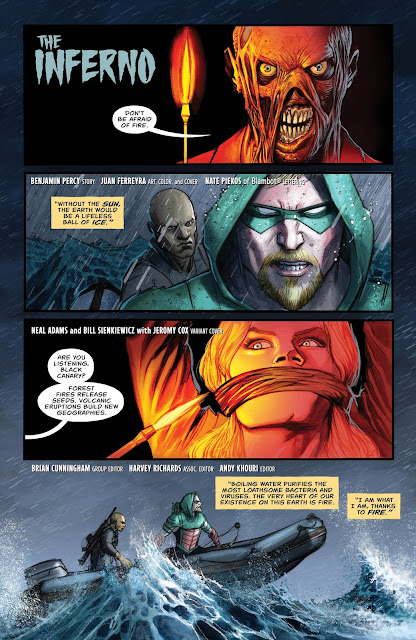 After Diggle gives Oliver a worse case scenario plan (blow the mother up!), he heads to the meeting and right away we realize that Broderick is there.  As Oliver listens to his former mentor complain about peace, he makes his way past the Burned guards and Inferno security to the light at the end of his tunnel...the Inferno vault.

While this is going on, Shado is teaching Emiko, Socrates style, but when it is time to fulfill her destiny, Emiko has other plans.  Yep, Emiko is still one of the good guys!!!  She (kind of) frees Canary and it's game on!

Before any real fighting goes on, however, Oliver arrives and faces his sister and luckily, Oliver is a patient man because he gives her the time to explain what has been going on.  What's been going on is Emiko has been behind everything that has helped Oliver all along.  It's not a shock, really, but I did like seeing it all the same.  That is until she admits she was kind of a double agent all along, but we'll work that out later. 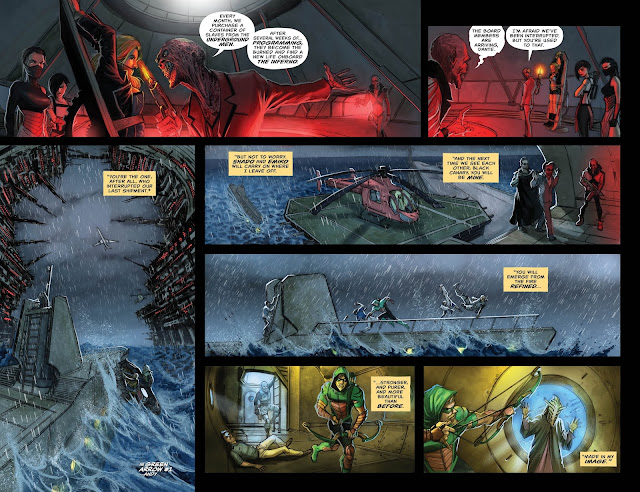 Right now we get to see Canary and Ollie work things out...actually, Dinah is pretty pissed that Oliver let her hang, thinking he was dead.  All is well and good, however, after a nice emotional reunion, but there is no time to hug and kiss as the Burned converge on our heroes.

The issue ends with Oliver making a tough decision, but after it appears that he has beat the Burned and the Ninth Circle (for now at least), he finds himself all alone in a very familiar place.  Oh crap, here we go again!!! 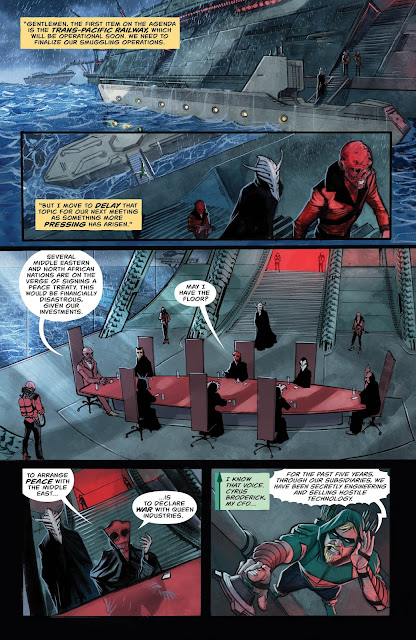 This is not the best issue of Green Arrow since Rebirth.  It felt a bit rushed and after waiting for a big payoff to this first arc, it kind of just ended.  There wasn't much action to speak of and while most of the gang got back together, there was no real tension to any of it.  I do like how it ended, though, as it will test Ollie once again, but as for what happened in the issue, this was pretty middle of the road for me.

Juan Ferreyra's art is never middle of the road and as he settles into the book, it keeps getting better.  Everything looked great as usual and my favorite panel was when Emiko shielded her eyes when Oliver and Dinah were kissing.  Classic!  I just want to mention something that I say on our podcast a lot...Ferreyra is one of the best colorists out there!  Just saying.

The first arc of the Rebirth Green Arrow comes to an end and instead of going out with a BANG! it just kind of ends.  It's not that I didn't like what Percy gave us, it just didn't seem big enough after the buildup.  Juan Ferreyra's art was outstanding, however, and the issue ends in very familiar territory...familiar, but very interesting.