I Smash Rachel Maddow On Using Hillary Clinton's Talking Points As Facts Against Bernie Sanders (Proving These Facts Are Faulty, i.e. Not Showing The Whole Picture)

Here is a video where Rachel Maddow repeats back Clinton's talking points as fact and presses the point. I thought I should document this since Maddow & Chris Hayes have stopped putting their shows online because of me :)

Clinton turns sights to general electionRachel Maddow reports on Hillary Clinton shifting the focus of her campaign to general election strategy ahead of the Indiana primary as Bernie Sanders continues to insist he will contest the Democratic nomination at the national convention. 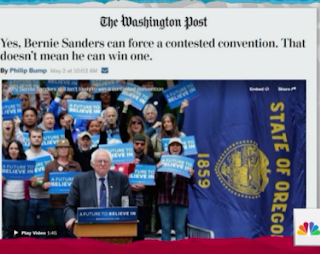 Rachel Maddow doesn't want a candidate to force a contested convention so is campaigning against it. 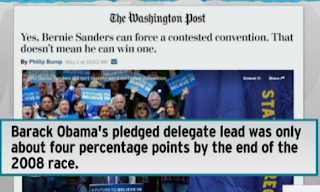 She points out a TINY bit of the story from 2008 about Obama & Hillary. 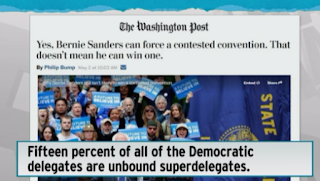 If they are unbound delegates then why are they put with Hillary... why are delegates pledged to an establishment candidate in the first place. (I understand some people are marketing Hillary's talking points on this matter as fact & I've been going through them) 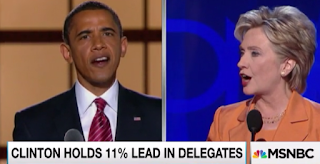 OK. So the woman Obama proved was a liar AND most like the GOP Establishment's George Bush holds an 11% lead... you think this is good ofr the democratic party or even America? (America comes first, btw) 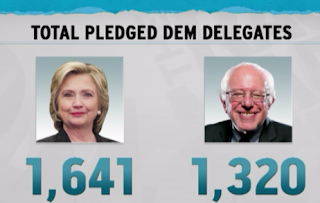 Funny thing is that while Rachel Maddow puts up these figures she leaves out the fact that the media has been ADDING the super delegates to Hillary's total (including when she was commentating with the others of Bernie Sander's Indiana win) to give her the momentum to win. It's not like the media doesn't know that news doesn't affect belief.

Here is what MSNBC and other media stations show the people most of the time (the wrong numbers, i.e. numbers that (look for how the delegates are portrayed at the bottom of the screen);

Morning Joe: What is the path forward for Sanders?Sen. Bernie Sanders picked up a win in the Indiana primary, and he is vowing to fight on in his campaign. Chris Jansing and Time's Jay Newton-Small discuss.

This is one of the media's many ways of trying to influence the perception of the people to pick the establishment candidate. More listed in the article extract below; 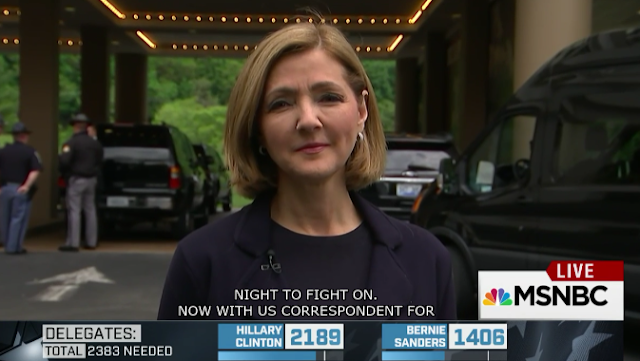 Here is a close up;

I'm just saying, Maddow's hypocrisy (or blindness dues to emotional involvement) on this issue is glaringly obvious. Saying a higher total due to the Super Delegate by the media helps create teh perception of momentum WHICH ACTUALLY CREATES MOMENTUM. The media knows this. It's why they can brag about influencing people. But when there is an emotional involvement in the candidate (irrespective of evidence) clearly no one in the corporate media hast any moral qualms about betraying everything America stands for.

What she seems to find funny is that Sanders would dare contest Hillary over her and the Democratic parties (and medias) use of the Super Delegates to build momentum for Hillary in the public's perception. Clearly, right now the media (including Rachel Maddow) are doing the "We may have bragged about being able to influence public perception before but right now we are going to pretend these views came from the people while we market the latest talking points to get the establishment way"

Rachel Maddow doesn't like it. That's why she was very careful not to ask any pertinent questions (see link list below of possible relevent) about Hillary's past during her last townhall. Smart. Dishonorable. Un-American.

So the question is, with only a 4% lead in delegates by Obama, WHY did Hillary Clinton give up so fast? Could it have been the negative publicity of fighting someone who had no problem put her in her lying place?

Hillary, by this time, had already used racist tactics and laid the groundwork for the birther movement that would plague Obama throughout his Presidency while she supported him or ran away from him depending on current national polls. Imagine arguing in the National "Democratic" Convention.

"Hillary, why are you using racist tactics against Obama? Does this mean you were intentionally using racist call words like "super predators" to put black kids away for life (I understand using "thugs" is a new thing and "gang" was the old thing)

"Hillary, why do you smile so much when you lie and are caught lying while you nit pick on Obama and the media lets you. I mean your lies are big but still you stand there smiling like you just put one over everybody. Are you a habitual liar or do you just enjoy it during elections?"

"Hillary, you supported the Iraq War vote with the passion you gave to supporting - the already proven to be faulty - crime bill of 1994 to win right wing votes for an election... will you say and do anything no matter how bad it is for the country and it's citizens as long as it's polling well? Or was that old Hillary the real Hillary? Yes, we understand that you said it was a mistake and endorsing the TPP 45 times was a mistake and the crime bill was a mistake (looking into others), well, I don't quite know if people care about your first two terms in office... you are a woman, so "third term for candidate if they are women" seems to be a popular thing right now... anyways, I digress, the point is, if your experience is one of always making the wrong decisions and then apologizing for it can we really risk such a person leading the country during these tumultuous times? We already know about how you took part in destabilizing Libya, Yemen ..." I could go on for a while.

I Smash Rachel Maddow On Using Hillary Clinton's Talking Points As Facts Against Bernie Sanders (Proving These Facts Are Faulty, i.e. Not Showing The Whole Picture)