Mormonism Is A Secretive Cult! A Crazy & Possibly Dangerous One At That! ... AND Glenn Beck Is One Of Them!

Mormon missionaries knocked on her door, spoke about the "latter days," and welcomed the Wilders into a close-knit community. "They take you in, they love on you, they began to supplant my biological family," Wilder explained. Joining the Church gave her and her husband a higher status in the college and church communities. In 1999, Brigham Young University offered her a job. 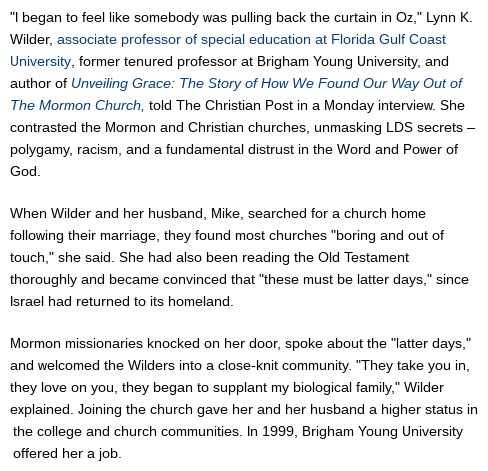 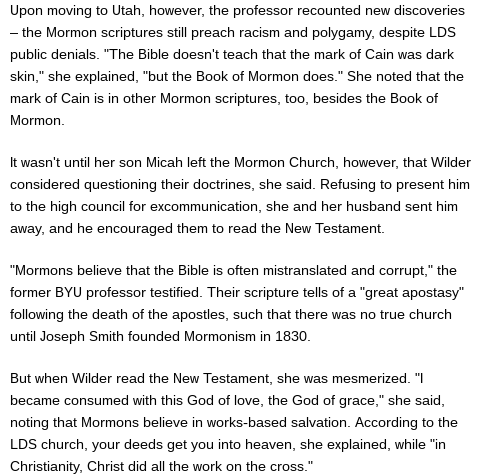 Secondly, Mormonism is a cult. Why? Because unlike other people they believe ONLY their way is "Christianity" and the rest are not even close because Joseph Smith is the true Apostle of God (or something like that)... and they keep secret beliefs that only they know about - or people who have made it up the chain enough to learn about it. This secret information about Mormons will be covered in this post.

Here is a Christian Pastor's analysis of Mormonism Being a Cult;

In his blog this week, Mars Hill Church pastor Mark Driscoll pointed to Romney's run for president as the root of the arguments between theologians—and then expressed his views.

“Historically, there has been a very clear line drawn between Mormonism and orthodox Christianity, with all leaders of the church across a wide spectrum of Christianity agreeing that Mormonism is not only heretical but also a cult,” Driscoll writes.

Although the megachurch pastor does not say whether Christians should take former Mass. Gov. Romney's beliefs into consideration when voting, he predicts “there will be continued effort to bring Mormonism into the center of Christian orthodoxy.

“Thus, it's important to understand what the cult of Mormonism teaches, to understand that it's antithetical to Christianity,” he explains.

He writes: “And since it’s true that Mormonism deviates from Christianity on fundamental doctrinal issues, it’s not helpful to call it a cult based solely on that definition alone as we’d have to call any group that does so a cult as well.”

When looking at the theological definition of a cult, Driscoll says “Mormonism is most certainly a cult theologically speaking because it deviates substantially from historic Orthodox Christian belief about essential issues related to God, humanity and salvation.”

But the mere fact that the Church of Jesus Christ of Latter-day Saints deviates from Christianity is not what makes the religion a cult; otherwise, any belief system outside of orthodox Christianity could be called such. Mormons, however, “claim Christianity while subtly subverting it in both practice and theology.

“Because it claims to be Christian, uses Christian language, but is antithetical Christianity, it must be labeled a cult theologically.”

While the pastor says many Mormons are good neighbors, friends and fellow citizens, he says “we cannot go so far as to call them brothers and sisters in a common faith.” Doing so “is to not only confuse real Christians, but to also diminish the importance of lovingly speaking with Mormons about the errors of their belief in hopes of seeing them come to know the real God of the Bible and avoiding eternal damnation for worshiping a false god.”

Driscoll goes on to point out that biblical and orthodox Christians believe that our sins are covered by Jesus, and Jesus alone—not our good works. Whereas “for the Mormons, it is not Jesus' blood that makes us righteous, but rather his sacrifice that gives us grace to be good, which leads to righteousness and salvation,” he notes.

“In short, Mormons believe that being a good person is precisely what makes someone a Christian. Jesus is not the means of salvation, but the point at which the means begins. This is fundamentally at odds with orthodox Christian teaching, false, unbiblical and heretical,” he argues.

The LDS church launched its “I'm a Mormon” campaign in New York City in June, a few days after the large success of the Book of Mormon musical at the 2011 Tony Awards. The campaign extends to 12 cities in seven U.S. states featuring advertisements on TV, city buses and billboards, asking Americans to visit the church's website to learn about its beliefs and its followers.


In addition to Driscoll's explanation of the Mormon belief on Jesus, followers deviate from Christianity's Trinity, the belief of God in three Persons. They also believe that Joseph Smith Jr.—the founder of Mormonism—is the first latter-day prophet who restored the original Christian church in the 19th century in America. Mormon followers are known for their belief in “divine” books of Scripture separate from the Bible, including the Book of Mormon, the Doctrine and Covenants, and the Pearl of Great Price.

Thirdly: They have beliefs that suggest "conquering America" could be on thier Agenda!

On Mormons from a Blog;

Today on the show, we continued our look at the Mormon religion.  I think if people are thinking about voting for Mitt Romney, they should know what he believes.  And believe me, the Church of Jesus Christ of Latter Day Saints teaches some pretty bat shit crazy things.  For instance, Mitt Romney believes that if he is a good Mormon, when he dies, he’ll become a God and will get his own planet to rule over.  I’m not kidding.
He also believes that Jesus Christ will return — to Jackson County, Missouri.  If Mitt is president, the two of them will rule the world together. Seriously.
I learned a lot more while speaking with Tricia Erickson, author of Can Mitt Romney Serve Two Masters? The Mormon Church vs. The Office of the Presidency of the United States.  While I don’t agree with her politically, she did grow up in the Mormon church as the daughter of a bishop.  She lived through many of their bizarre rituals and understands the cult-like ways of this religion.
I believe Mitt Romney has the right to believe in whatever he wants to believe.  But I think the American people should know what he believes before they case a vote for him.
Seriously, if 'Mitt is President they will rule the world', if that isn't a cult then what is? Could Mitt Romney's attack on Trump through delegates just be another strategy for his to rule the world with Jesus? Do we really want someone who wants to rule the world with Jesus cause of some Prophecy and cult-like beliefs any where near the Presidency? Maybe we need to disarm the Mormons and let them have Utah?

Look at what else I uncovered: 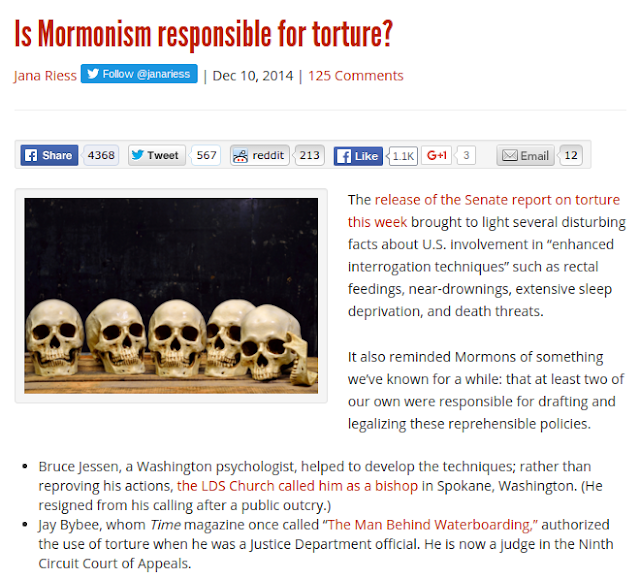 But as lyricist Stephen Sondheim has rightly pointed out, nice is different than good. Today as the specific details of our country’s approval of torture become clear, some are noting a huge disconnect between the actions of these men and the teachings of the Mormon faith.
A By Common Consent editorial observed that critics “aren’t wrong to note our [Mormons’] deference to authority”:

I too am appalled by the Mormon connection. These are men who dehumanized others, or at least planned and authorized that systemic dehumanization . . . and then went to church on Sundays to partake of talks and lessons on basic morality.
How did this happen, and what can Mormons do about it?
The first step is to admit that we have a problem. Several years ago, the Mormon Times* published a shrill and defensive column about Mormonism and torture, saying that journalists had damned all Mormons for the actions of a tiny minority of the church’s members. While this is a fair point, the column went overboard by claiming that journalists’ even documenting the men’s Mormon connection was an example of anti-Mormonism.
It’s not anti-Mormonism to point out that at least two key torture advocates in the Bush administration were LDS, especially considering that Mormons only constitute less than 2% of the general population.
Worse than that overrepresentation, which could always be explained by way of coincidence, is the fact that the LDS Church as an institution has not publicly called on governments to prohibit torture. In 2005, it did not join with other religious leaders in demanding the Bush administration end all forms of torture, though it did issue a private statement that condemned “inhumane treatment of any person under any circumstances.”
Apparently we Mormons can join with other religious leaders in officially denying LGBTQ people the right to marry (as in last month’s LDS participation in the Vatican conference on the family), but we can’t join with them in saying that the physical and emotional torture of human beings is unacceptable.
Our interfaith cooperation extends only so far as it furthers our own agenda.
So let’s put torture on the agenda. Let’s talk about it. And let’s learn from the example of Mormon Alyssa Peterson, who went to Iraq in 2003 as a counter-intelligence interrogator. As was recounted in Religion Dispatches, when Peterson was ordered to use “advanced interrogation techniques,” she refused to comply. Tragically, she committed suicide rather than participate in torturing other human beings.
Mormonism helped to create Bybee and Jessen, but it also shaped Alyssa Peterson. Our tradition contains the seeds for a more robust moral courage; we only need to nurture them.
- See more at: http://janariess.religionnews.com/2014/12/10/mormonism-responsible-torture/#sthash.l3otCAXm.dpuf

Mormonism Is A Secretive Cult! A Crazy & Possibly Dangerous One At That! ... AND Glenn Beck Is One Of Them!