Tags: sung
July 29th 2015
View original
It was recorded in the Bible that Jesus once said:
“For what will it profit a man if he gains the whole world, and loses his own soul? Or what will a man give in exchange for his soul?” – Mark 8: 36-37 NKJV
“人就是赚得全世界，赔上自己的生命，有什么益处呢？人还能拿什么换生命呢？” – 马可福音8：36-37 CUVMPS
And it was these very same verses from the Bible that became the driving force behind one of the greatest indigenous missionaries and revival evangelists the Middle Kingdom and its global diaspora has ever known. 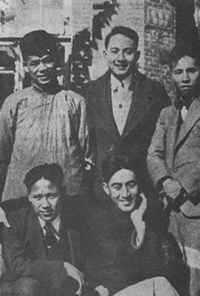 John Sung (standing, first from left) with the Bethel Evangelistic Band
After three years serving in the band, it was finally dissolved in 1933 and Sung then became an independent itinerant revivalist and evangelist. For the next 8 years of his life, he devoted his life to travelling all over the Chinese-speaking world to preach and evangelize. His ministry brought him not only to many different parts of mainland China, but also to the islands of Taiwan that were then under Japanese occupation, as well as to many Southeast Asian countries where sizeable Chinese communities could be found, such as Singapore, Malaysia, Indonesia, the Philippines, Thailand and Vietnam. He was a preacher who was in high demand throughout the Chinese diaspora, receiving numerous invitations to speak in large and small churches in both major urban centres and rural villages. And his presence on the pulpit often drew large crowds and led countless people to Christ. 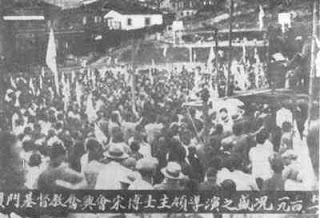 Hundreds gathering for an open-air revival meeting with Pastor Sung in November 1934 in Gulangyu (鼓浪屿, Gŭlàngyŭ), Xiamen (厦门, Xiàmén)
One of Sung’s main focuses in his sermons during his spiritual revival meetings was the issue of sin. He took the issue of sin and repentance very seriously, and would often mention specific categories of sins in which he would ask those who have committed them to come forward and repent. He could also point out specific sins committed by pastors and church leaders with prophetic accuracy, leading some to repentance and others to resentment. His meetings often drew many from the congregation to come forward and repent for their sins in tears and cries for divine mercy.
Nonetheless, alongside his fervent preaching of sin and the need for repentance, Sung was able to move his audiences with the message of Jesus’ tender and unfailing love in a way that few others could. His style of preaching was always filled with intense energy and emotions. He would often pace up and down the aisle, jump up and down in front of his audience, run from one end to the other on the platform and even leap over or stand on the Communion rail when delivering his sermons. Additionally, he would bring in props to illustrate his message (such as a coffin to signify death from sin), or sing a hymn all of a sudden in the middle of his sermon. Once during his sermon, he produced a coffin in front of his audience, shouted “Get rich! Get rich! Get the coffin!” (发财！发财！发棺材！, Fā Cái! Fā Cái! Fā Guāncai!), and then laid himself down in the coffin, in order to illustrate through a play of Chinese words that chasing money will not bring eternal life. 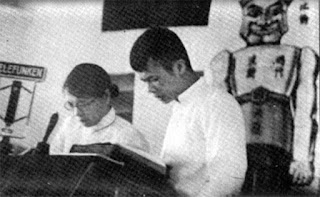 Pastor Sung delivering a sermon with an interpreter beside him
Sung’s ministry and personal life was also one filled with prayer, healing and miracles. Besides drawing thousands to his revival meetings and touching the hearts of many to repentance and belief in Christ, his ministry saw numerous incidences of physical and spiritual healing. Wherever he went preaching, he laid hands and prayed for thousands of people, healing them of various sicknesses, infirmities and addictions. Many witnesses, some even initially skeptical, reported witnessing with their own eyes the blind seeing, the lame walking, the demon-possessed delivered, the disabled healed, and the opium addicts going cold-turkey. Many would also send him personal prayer requests, and it was said that wherever he went, he would carry a worn-out leather briefcase filled with these prayer requests and photos of the requestors so that he could spend time praying for them. 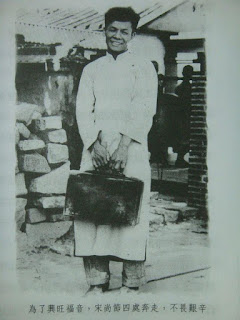 Pastor Sung with his well-known worn-out leather briefcase
The frank manner of preaching and prophetic calls to repentance that became characteristic of Sung’s ministry undoubtedly earned him some enmity and slanderous threats wherever he went, but that never stopped him from fervently proclaiming the gospel of Christ wherever he preached. At times, he would organize large Bible conferences that may even last for weeks, in which he would expound the whole Bible book by book for his audience. It was said that as a result of his ministry all over East and Southeast Asia, more than 100,000 Chinese came to a faith in Christ, with countless other previously nominal Christians returning to their faith in increased fervour. There were also reports that some of the churches he preached in saw a dramatic increase in membership and activity after he left, not to mention the establishment of numerous evangelistic bands that went out from their churches to spread the gospel every weekend. 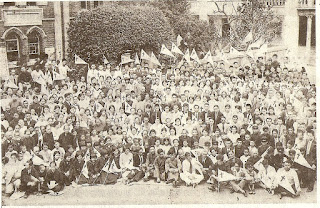 Pastor Sung with one of the evangelistic bands that he established after a revival meeting in Taipei (台北, Táibĕi), Taiwan 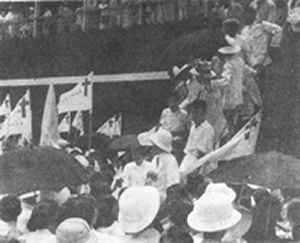 Hundreds of people whose lives were touched by Pastor Sung's preaching coming to bid him farewell as he boarded a ship from Singapore
For the most part of Sung’s later life, his days were fully packed with a long string of revival meetings and preaching engagements. Right after wrapping up a revival meeting in one town or country, he would step onto a ship or train bound for his next revival meeting in another town or country, sometimes with little respite in between. This consequently took its toll on both his family life and physical health. His wife and children remained in Shanghai and hardly had the chance to see the man of their house spending time with them at home. Sung frequently lamented the fact that he wasn’t able to even be present when his wife gave birth, and he often regretted the way he treated his family with his long absences, strongly advising others around him never to follow his example when it comes to family life.
More than his absences from his family, his physical health suffered the most from his hectic preaching schedules and travels. What began as a bad case of haemorrhoids during his college days gradually became painful anal fistulas complicated with frequent bleeding from what was probably colon cancer. To add insult to the injury, his deteriorating condition was also compounded by tuberculosis of the bone that caused much degeneration of his hip joints. At times while preaching on the pulpit, he had no choice but to sit down and bend over to lessen the pain. 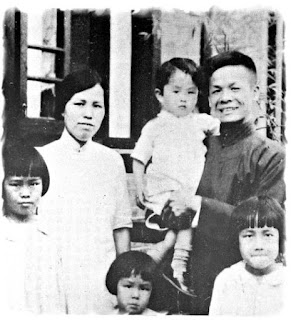 Pastor Sung and his family
Nonetheless, Sung never saw these as reasons for regret. In the last three years of his life, his life saw an almost regular cycle of surgery, hospital recovery, temporary good health and ministry, followed by relapse. These cycles became shorter as time passed. Sung and his whole family relocated from Shanghai to Beijing (北京, Beĭjīng) where he received his medical care. Whenever he was confined to his recovery bed, he spent time reflecting upon his life, his ministry and the Bible. He continued receiving visitors from friends and letters from all those places where he had preached in, and he even got to spend more time with his wife and children. Sung saw his deteriorating physical health and pain in the light of what Apostle Paul wrote in the Bible:
“Because of the surpassing greatness of the revelations, for this reason, to keep me from exalting myself, there was given me a thorn in the flesh, a messenger of Satan to torment me – to keep me from exalting myself!” – 2 Corinthians 12:7 NASB
“又恐怕我因所得的启示甚大，就过于自高，所以有一根刺加在我肉体上，就是撒旦的差役要攻击我，免得我过于自高。” – 哥林多后书12:7 CUVMPS
Sung acknowledged that among his main shortcomings in life were his short temper, his pride in looking down upon others and his tendency to exaggerate things even in his sermons, and that his physical suffering was a ‘thorn in the flesh’ that God gave him in order to keep his pride in check.
Sung passed away peacefully in the presence of his family in the early hours of the morning of August 18, 1944 in Beijing, at the age of 42. Though his passing was a great loss to the Chinese Christian world, his legacy as the great ‘Servant of the Lord’ (主仆人, Zhŭ Púrén) lives on, and until today he is recognized as one of the giants of the Christian faith in the Chinese-speaking world whose revival ministry changed the lives of countless people throughout the Chinese diaspora of the 1930s. 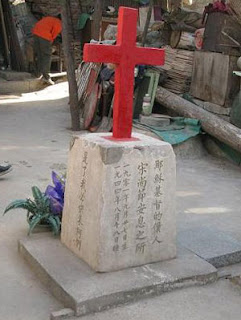 John Sung's tomb in Xiangshan (香山, Xiāngshān), Beijing. It was said that the site where his tomb lies today once belonged to a church that Pastor Sung himself had established. This simple tomb now lies in a sad and lonely state in the middle of a junkyard compound, hidden away in a solitary spot located near several simple residential quarters on the slopes of Xiangshan