The guessing game has come to an end. Sun Group, the producers of Superstar Rajinikanth starrer 'Endhiran' today announced that they Earned Revenues of Rs 179 crore from the film.

A release announcing the quarterly financial results of Sun Group said: 'During this Quarter, the Company released a blockbuster movie simultaneously in three languages titled ‘Endhiran’ in Tamil and ‘Robot’ in Telugu and Hindi.' 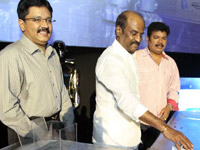 'The Company Earned revenues of Rs.179 Crores, including Rs.15 crores expected towards satellite rights which has not been included in the revenues in this quarter. The Company has spent Rs.132 crores on the production of this blockbuster.'