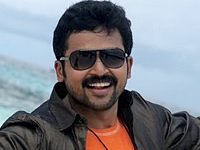 Karthi’s performance in his recent release ‘Siruthai’, in which he performed dual role for the first time in his Acting career, has won appreciation from his sister-in-law Jyothika.
“Anni said long back that she would watch the film on the first day itself since I am playing a police officer. Sticking to her words, she watched ‘Siruthai’ on the very first day,” Karthi says.

What We Learned from the IIA’s Webina…
How Stay Interviews Help Retain Top T…
Impulse Control Activities For Kids: …
How To Get Rid of Ticks in the Yard –…
Crackpot Cryptography and Security Th…
“She thoroughly enjoyed the movie,” the actor says and adds: “She sent me congratulatory messages through mobile even before the show got over. I am overwhelmed.”
On the possibilities of his acting together with his brother Suriya, Karthi says, “I don’t think we would share the screen space in the near future. Because, he is busy for the next two years. And several other factors have also to be considered.”


This post first appeared on Tamil Ten Stars, please read the originial post: here
People also like
What We Learned from the IIA’s Webinar on Broadband Affordability
How Stay Interviews Help Retain Top Talent
Impulse Control Activities For Kids: How To Teach Impulse Control
How To Get Rid of Ticks in the Yard – 8 Steps
Crackpot Cryptography and Security Theater
What AI Can Do For Your Business
StartEgypt Hosts First Female Founders Forum to Inspire Entrepreneurs
6 Daughters’ Day Movies: Best Movies Parents Can Watch With Daughters
Verisimilitude VS Reality - Part 4 - Story Arc and the Fiction Delivery System