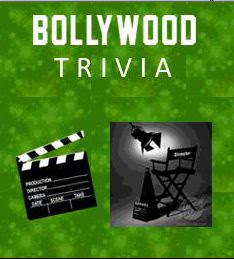 1. In the movie Omkara, it was Saif's idea to chop down his hair for the role of "Langda Tyagi" but later on, he refused to cut down his hair as he had grown his hair. Finally, Vishal managed to convince him by telling him to sacrifice his hair to please the gods on the occasion of Eid.

2. The perfectionist Khan (Aamir Khan) loves to play games where he can think and apply his mind. Chess and Rubik's cube are his favourite games.

3. Shekhar Kapur's 'Mr. India' was originally written for Amitabh Bachchan. The film was also scripted keeping in mind Amitabh Bachchan's voice but Big B refused to be a part of the film and to do the 'invisible' role. Afterwards, Anil Kapoor accepted the offer and 'Mr. India' became a landmark movie in Anil's Bollywood career.

4. The first song to be recorded for DDLJ was Mere Khwaboon Mein Jo Aaye. Aditya Chopra wanted everything to be just perfect for his debut film. So he rejected 24 verses by Anand Bakshi before approving this one. The song went on to be a big hit amongst the masses.

5. Kajol's famous scene in Kuch Kuch Hota Hai where her pallu flies and slips from its position thus making SRK realize his love for Kajol was actually scripted by choreographer Farah Khan and not director Karan Johar.

6. Swades is the first Indian film to actually be shot inside the NASA research center. For authenticity, Ashutosh Gowariker shot a scene at Launch Pad 39A, at Kennedy Space Center in Florida, USA.

7. Saif Ali Khan was offered the role of Raj Malhotra in Dilwale Dulhania Le Jayenge. But he refused the role which then went to Shah Rukh Khan. King Khan had initially resisted playing the lead in this film. However, it was DDLJ that created his screen persona of a romantic hero.

8. Amitabh Bachchan is a very disciplined person in real life. He values time more than money. He is very punctual and always keeps time. Those close to him know how much he values time and strictly follows his schedules.

9. Before, John Abraham proved himself in the world of Bollywood, Karan Johar offered him to play the role of Robbie in 'Kabhi Khushi Kabhi Gham'. Robbie, who was later on played by TV actor Vikas Sethi tries to woo flippant Kareena Kapoor in the movie and probably John was not interested and declined the cameo offer.

10. The name of Shah Rukh Khan's character Raj Malhotra in Dilwale Dulhania Le Jayenge was given by Aditya Chopra after the legendary Raj Kapoor. The name of Raj was synonymous to SRK in films like Chalte Chalte, Baadshah and Raju Ban Gaya Gentleman.

11. Kareena Kapoor wanted to be a lawyer and after completing her 12th she took an admission in Government Law College at Churchgate. But being a Kapoor she couldn't resist her acting talent. And after completing a year she moved on to Bollywood.

12. Before the release of his debut film, Hrithik Roshan used weight training to bulk up for his role. Did you know that he was trained under the supervision of actor Salman Khan? The film went on to become one of the biggest blockbusters of all times.

13. Aamir Khan had more girl friends than male friends when he was a kid. He was also nicknamed Kanhaiyalal by his family because he was always surrounded by girls. His mother was requested by Aamir's teacher to shift Aamir to a boy's school as he used to always argue with his girl counterparts.

14. Aishwarya Rai Bachchan is a true linguist. The actress is well versed with not just one or two but six different languages that include Tulu, Hindi, English, Marathi, Tamil, and Bengali.

15. Farah Khan wanted Nana Patekar to play the role of Raghavan in her directorial debut Main Hoon Na. But Farah was scared to approach him for the role and that's when Suniel Shetty was roped in to play the negative character.

16. Shah Rukh Khan was the first choice for the role of Munnabhai, but was forced to turn it down when he had back problems. After SRK, Vivek Oberoi was considered for the same role but Sanjay Dutt finally won it.

17. Katrina Kaif was born in Hong Kong, moved to Hawaii till she was about 14, then she moved to London. The actress got her first modelling assignment at age 14. Now, an A-League actress in Bollywood, Kat has shifted base to Mumbai, and has also bought a bungalow in London where her family lives.

18. The role of 'Daya Shankar' in Gangster, which was inspired from the real life of Abu Salem was originally offered to Pakistani cricketer Shoaib Akhtar. But, when Shoaib Akhtar turned down the offer, Shiney Ahuja accepted it.

19. Dimple was only sixteen when Raj Kapoor introduced her in Bobby . She got married to Bollywood Superstar Rajesh Khanna at the age of 16 and despite the enormous success of Bobby, took a sabbatical from acting to raise her children.

Karen S. Wiesner, Tension and Twists,…
Concert Film Review: The Rolling Ston…
Meow Bar, Moscow
Top 10 Biggest Blackjack Jackpots
Vitre en verre trempé pour LG L Fino
20. Reportedly each scene in K Asif's Mughal-e-Azam was actually shot thrice. The first was for the Hindi version, second had lips moving to Tamil dialogues while third in English. It's common knowledge that the Hindi version was a blockbuster hit but the Tamil version flopped badly. So the makers subsequently aborted the idea of dubbing the English version with British actors. Unfortunately no print of the English version is now in existence.

21. Hrithik Roshan was considered for the title role of Don, but upon completing the script, Farhan Akhtar realized that a more mature actor was needed and thus the role went to Shahrukh Khan.

22. Priyanka first appeared on the silver screen in India in a Tamil movie Thamizhan (2002). She made her debut in Bollywood with The Hero: Love Story Of A Spy in 2003, co-starring Sunny Deol and Preity Zinta.

23. Before filming her bikini scene in Dhoom 2, Bipasha Basu lived on oranges for three days prior to her shoot.