The giant ovoid heads have toothy grins, but they have no eyes.

However, I wasn't primarily interested in the forms of the monsters when I did this little on-site Painting. (Watch the YouTube video) 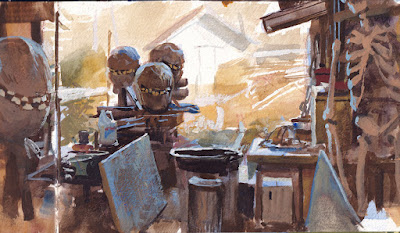 Things You Should Stop Worrying About…
How to Develop an Educational App?
Step-by-Step Guide on Creating the Ul…
Best Organic Coffees That Are Healthy…
14 Best Websites to Watch | Download …

It's mainly a study of mise-en-scène. It comes from the world of theater and Film, and means literally 'putting on a stage.' Work spaces like this one are an ideal place to find interesting examples of mise-en-scène because of the Elements are placed without aesthetic intention.

Mise-en-scène is a crucial element of picture making. Traditional theory defines to include many aspects that a director, production designer, or cinematographer would deal with, such as point of view, framing, cropping, placement of props and characters, lighting, and color. In film, it also includes how elements move throughout the shot, and even frame rate and lens choices.

Such a broad definition waters down the meaning for me. When I think of the term in relation to painting, I usually think more narrowly of the original sense of how elements are arranged in relation to the viewer. Are there foreground elements? Are some things cropped off the edge? Are they neat or messy?

Here's a video that explores the topic from the point of view of film. (Link to video)