OMG! Heiress Amanda Hearst Wore Not 1, but 5 Stunning Gowns For Her Extravagant Wedding 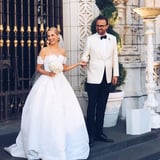 Amanda Hearst's Links">wedding was memorable, to say the least. The four-day celebration was held at Hearst Castle in California. The heiress wore not one, but five amazing dresses during the span of her Wedding. Guests like Nicky and Links">Paris Hilton and Lauren Bush Lauren celebrated alongside the happy couple. Amanda, who is the great-granddaughter of publishing tycoon William Randolph Hearst, wed Norwegian film director Joachim Rønning. Rønning's credits include Pirates of the Caribbean: Dead Men Tell No Tales and Disney's upcoming movie Maleficent: Mistress of Evil.

Amanda started out in a sequined high-neck minidress during her rehearsal dinner. The bride, who owns the ethical luxury apparel site Maison de Mode, requested Oscar de la Renta's creative director, Fernando Garcia, to make her wedding dress "sustainably," according to an interview with Town and Country. "The silk faille of the gown, designer Fernando Garcia explains, comes from the Taroni mill, which won the sustainable producer award at the Green Carpet Fashion Awards in 2017. This fabric and all other elements were items we already had in house so we did not have to incur any fuel usage for transportation," Garcia said. "The boning was taken from an existing gown from a previous collection and reused in Amanda's gown, so it was made to be completely sustainable!"

The bride then switched into a Galvan white halter dress for dessert on a Moroccocan-themed terrace, which was inspired by Marrakesh's Majorelle Gardens. Then, the couple rode off in a vintage convertible where Amanda wore a Giambattista Valli Couture number while they made their way to Chateau Marmont. At the hotel, she wore a one-shouldered Oscar de la Renta minidress. Read on to see her gorgeous Wedding Dresses ahead.

Related:
When You're Elie Saab's Daughter-in-Law, Your 4 Wedding Dresses Look Like This

OMG! Heiress Amanda Hearst Wore Not 1, but 5 Stunning Gowns For Her Extravagant Wedding