Exclusive: Jack Reynor Succeeds in Being the Worst Boyfriend Ever in This Midsommar Clip 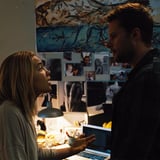 On the surface, Midsommar, Ari Aster's follow-up to grueling horror smash Hereditary, is about a lot of things: grief, a Swedish pagan cult, extreme flower crowns. But at its core, the film is a break-up movie. An extraordinarily f*cked up break-up movie.

If you haven't seen it, Midsommar follows Dani and Christian (Florence Pugh and Jack Reynor) as they struggle to figure out their strained relationship during a nine-day midsummer festival in Sweden. While at first they're delighted by the choreographed dances, traditional garments, and colorful blooms, Dani can't escape the whirlpool of grief she finds herself in. And Christian? Well, Christian is no help whatsoever. (Seriously - he's the worst).

In our exclusive clip from the film, above, you'll get a taste of the dynamics in their relationship as Dani tries to understand why Christian hid his upcoming trip to the festival from her. Unsurprisingly, he only offers her a not-quite-an-apology apology in response. Check it out, and then see all the other horror movies coming out this year that should be on your radar.

Exclusive: Jack Reynor Succeeds in Being the Worst Boyfriend Ever in This Midsommar Clip