A Never-Before-Seen Freddie Mercury Music Video Has Been Unearthed, and We Can't Stop Watching 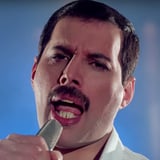 Universal Music Group surprised Freddie Mercury fans all over the world on Thursday morning with a very unexpected gift: a brand new music video featuring the singer almost 30 years after his death.

The piano-heavy version of "Time Waits For No One" sees Queen's lead singer belting out the track on stage at the Dominion Theatre in London, as a very simple blue background shifts colors behind him. The Song was originally recorded all the way back in April 1986 as part of a concept album for Dave Clark's 1986 musical Time. Clark and Mercury were close friends and collaborators, who worked for nearly two full years on stripping down the complex original version of the song, which has 96 backing-track vocals.

In Mercury's version of the song, which you can listen to above, it's just his unbelievably powerful voice paired with keyboardist Mike Moran's piano playing. Moran had never met Mercury before they began working on the song, but they went on to write "Barcelona" together years later. Of their time performing "Time Waits For No One," Moran said it was fueled by "fabulous food, vodka and Cristal Champagne," according to a Universal Music Group press release.

UMG also released a clip of an interview conducted between Clark and Mercury, which gives fans a taste of their friendship.

"We got on great . . . if I didn't like something I'd say, and vice versa," Clark told UMG. "We were both aiming for the same thing: to make something special."

A Never-Before-Seen Freddie Mercury Music Video Has Been Unearthed, and We Can't Stop Watching