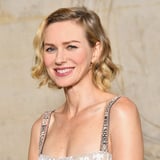 The as-yet-untitled Game of Thrones prequel series just announced the first of its cast! According to Variety, Naomi Watts has officially been tapped to star in the pilot. There isn't much known about Watts's character, though it is known that she is playing "a charismatic socialite hiding a dark secret." Sounds deliciously mysterious.

The pilot for the prequel is set thousands of years before the events featured in author George R. R. Martin's Song of Ice and Fire series. According to HBO's description of the project, "The series chronicles the world's descent from the golden Age of Heroes into its darkest hour, and only one thing is for sure: from the horrifying secrets of Westeros's history to the true origin of the white walkers, the mysteries of the East to the Starks of legend . . . it's not the story we think we know."

HBO ordered the pilot over the Summer and filming began this October in Belfast through Paint Hall studios in the city's Titanic Quarter. Though the prequel has no official title as of yet, Martin revealed it has the working title The Long Night. Though the show likely won't be available until 2020 if it's ordered to series, this is exciting news for Game of Thrones fans as we wait for the premiere of season eight!