Bill Murray Returns to SNL as Steve Bannon, Reminds Us Why He's a National Treasure 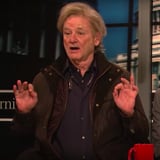 Bill Murray made a glorious return to Saturday Night Live this week. The former cast member appeared as President Trump's current archenemy, Steve Bannon, who recently fell out of Trump's graces for comments he made to Michael Wolff, which were later included in Wolff's tell-all book, Fire and Fury. In the hilarious cold open, Murray as Bannon shows up on MSNBC's Morning Joe show with Mika Brzezinski (Kate McKinnon) and Joe Scarborough (Alex Moffat) and refuses to admit that his political career is over. Watch the clip above to see why everyone's praising Murray's SNL performance.

Bill Murray Returns to SNL as Steve Bannon, Reminds Us Why He's a National Treasure