The Simpsons Reviewed Donald Trump's First 100 Days, and It's So Dark 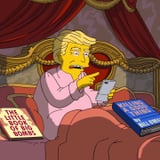 In a promotional clip for an upcoming episode, The Simpsons tackled Donald Trump's first 100 days in office, and it's both grim and ridiculous.

For starters, the video opens with a jarring shot of Sean Spicer, who's committed suicide in the official press briefing room. See? We warned you it was dark. A few seconds later, Steve Bannon and Jared Kushner are seen strangling each other. Other notable moments include the president's wig taking on a mind of its own, Ivanka Trump getting appointed to the Supreme Court, and Marge and Homer Simpson self-medicating.

Wuhan Weather Report
The end is the beginning?
Sony, Microsoft, Nintendo Unite to Co…
Play It Loud: The Instruments of Rock…
Guess Who – Superstar Has Fall Out Wi…

Watch the quintessential video - paid for by "Anybody Else 2020" - above.

Guess Who – Superstar Has Fall Out With Director

I Hope That You’ll Be Alive Tomorrow!

Major Habits Holding You Back and How to Break Them

2018 U.S. Senate race (Utah), the #NeverTrump return with Mitt Romney and Why I have Decided to Back the Libertarian Craig Bowden.

The Simpsons Reviewed Donald Trump's First 100 Days, and It's So Dark