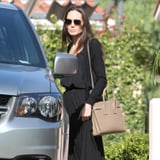 Angelina Jolie was seen arriving at Hotel Bel-Air in LA on Thursday afternoon. The actress, who's been keeping a low profile as of late, wore a long black dress, matching cardigan, and aviator sunglasses as she exited her car. While the casual outing marked the first time Angelina has been spotted in public since her split from Brad Pitt, she recorded a video for the International Criminal Court about their new policy regarding children back in November.

Earlier this month, it was revealed that Angelina had been granted physical custody of her six kids, Maddox, Pax, Shiloh, Zahara, and twins Vivienne and Knox, with Brad. In documents obtained by ET on Dec. 5, it was revealed that Brad will continue to have agreed-upon therapeutic visits with his children as seen fit by the family's therapist and will also continue to attend weekly individual and group therapy and submit to random drug and alcohol tests. As to whether or not Brad will see his children for the holidays, a source says, "If a child says they don't want to see Brad on Christmas, the psychiatrist isn't going to force them. That's the whole purpose of this agreement."

Related:
Billy Bob Thornton on His Relationship With Angelina Jolie: "I Never Felt Good Enough For Her"

Indoor Air Quality, Here’s how to Improve it!