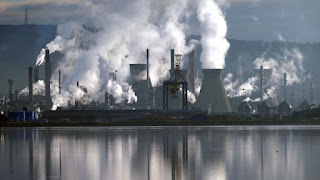 The shutdown of a major Oil Pipeline in the North Sea has triggered a bigger-than-expected drop in the UK's rate of industrial output.
December's 1.3% month-on-month decline for industrial production was the fastest drop recorded by the Office for National Statistics (ONS) since 2012.


The slump comes after the Forties pipeline, which pumps about 450,000 barrels per day of oil, was shut in mid-December for about three weeks when a crack was discovered.


However there was better news elsewhere for the UK economy, as the ONS also revealed continued growth in manufacturing and a surprise surge in construction output in December.


The rise by manufacturers of 0.3% in the month extended the sector's run of growth to eight months - the longest period for nearly 30 years.


Construction output jumped 1.6% in the month, compared with forecasts for a flat performance.


The figures add to the pressure on Bank of England policymakers after the UK's economy grew by 0.5% in the final three months of 2017