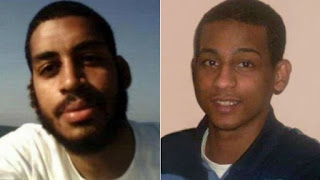 Two British men believed to be members of a notorious Islamic State group cell have been seized by Syrian Kurdish Fighters, US officials say.
Alexanda Kotey, 34, and El Shafee Elsheikh, 29, were the last two members of the cell to remain at large.


The four, all from London, were nicknamed "the Beatles" because of their British accents.


US officials said the "execution cell" had beheaded at least 27 hostages and tortured many more.


Families of the men's victims have called for the two seized men to go on trial. Diane Foley - whose son James, an American journalist, was captured and beheaded by IS - told BBC Radio 4's Today programme she wants the men to face life imprisonment.
"Their crimes are beyond imagination," she added.

Jam.GG – Play Retro Games online with…
Paris: Wonders of the 5th Arrondissem…
Look to the Bible as our guide in the…
Conor McGregor Haircuts: Rock His Ico…
Bad Touch Release Cover of The Marsha…