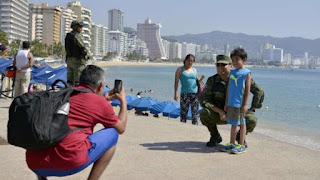 The US state Department has warned tourists to "completely avoid" five states in Mexico because of rampant crime levels and gang activity.
Colima, Guerrero, Michoacán, Sinaloa and Tamaulipas have all been classified as a level-four risk, the Highest in the scale.


That puts them at the same levels as conflict-ridden countries such as Afghanistan, Iraq and Syria.


Preliminary figures suggest that Mexico had a record number of murders in 2017.


This post first appeared on Quest Times, please read the originial post: here
People also like
Afloral – $5 Shipping on orders $75+
The Mysterious and Majestic Atacama Desert: A Guide to Visiting this Unforgettable Place