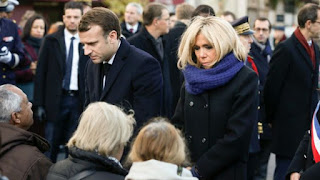 
The only jihadist suspect to have survived the night of carnage, Salah Abdeslam, is being held in solitary confinement and is on suicide watch.


He is believed to have handled logistics for the group which attacked a stadium, cafés and a nightclub.


But French media report that he has only spoken once, sticking to his right to silence, despite having faced judges six times.
Investigators say the dossier against him may not be completed until the spring of 2019, French BFMTV reports.


Mr Macron is attending ceremonies at the places targeted by the jihadists, whose carnage was claimed by so-called Islamic State (IS).


The first ceremony was at the national stadium - the Stade de France - where three suicide bombers blew themselves up outside after failing to get into a France v Germany football match.


Ex-President Francois Hollande, who was at the game, is accompanying Mr Macron.


This post first appeared on Quest Times, please read the originial post: here
People also like
A Guide To Visiting Antigua, Guatemala: The Best 5 Things To Do And See
NBA Jam Game Comparison
What would happen to a modern-day Moses in America?
Blu Jasmine From OnlyFans Says French Montana & Drake Offered Her Money For Sex [NSFW – 18 & OVER]
Van Dyke Beard Style: 3 Trendy Looks & How to Get Them
Advisors' Creative Solutions for Getting their Clients Tested Before Travel