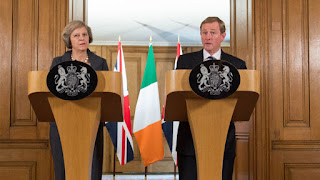 EU leaders are set to pave the way for automatic membership for Northern Ireland if it decides to reunify with Ireland in the wake of Brexit.
Dublin is expected to ask the bloc's 27 leaders to endorse the idea when they gather in Brussels on Saturday - without Britain - to adopt the EU's guidelines for exit negotiations, according to multiple reports.


"We expect Ireland to ask on Saturday for a statement to be added to the minutes of the European Council, which states that in case of a unification of the island in accordance with the Good Friday Agreement, the united Ireland would be a member of the EU," an EU Council source told the AFP news agency.


"We do not expect a change of the guidelines themselves, but only a statement to the minutes" of the meeting, they added, on condition of anonymity.


Irish Prime Minister Enda Kenny has previously asked fellow EU leaders to acknowledge that Northern Ireland would, like East Germany in 1990, automatically become a member in the event of unification with an existing member state.


Irish and EU legal experts have said this is the established position in international law of such territorial changes.


Under the 1998 Good Friday Agreement, referenda would have to be held on both sides of the border to approve unification.


Another source told Reuters the statement would "state the obvious, i.e. that also a united Ireland would continue being a member of the EU".
They added: "The EU does of course not take a stance on the possibility of a united Ireland.