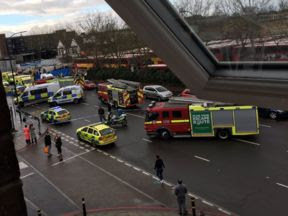 Five people are in hospital after a car hit a wall and collided with a group of pedestrians in London.
The accident took place in Bromley Road in Bellingham, Catford, in South East London at 8.20 on Sunday morning.


Police, paramedics and an air ambulance attended the scene and the five injured people were taken to nearby hospitals.


Their conditions are not yet known.
The driver of the car was detained at the scene, and has now been arrested under suspicion of causing serious injury by dangerous driving.