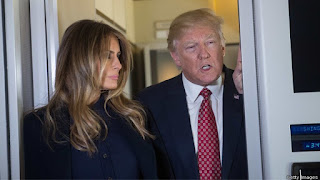 President Donald Trump has said he may sign a "brand new" executive order to revive his Travel Ban - a day after an appeals court ruled it should remain suspended.
Speaking to reporters aboard Air Force One, Mr Trump said his administration has "a lot of options" to achieve its aim of restricting immigration from seven Muslim-majority countries.


One of those options might involve rewriting the controversial executive order, or replacing it with a new one, to sidestep the legal issues which have caused the travel ban to become held up in the courts.


Mr Trump said it is likely that "very little" would be changed in a second executive order, and hinted that it could be signed as early as Monday or Tuesday.


"We need speed for reasons of security. So it could very well be that we do that," the President added during the surprise visit to the press cabin, where he was accompanied by First Lady Melania Trump.


Green card holders or permanent residents from the seven affected countries may be excluded from the travel ban if the decree is revised, according to a congressional aide.

Bikepacking - A Brief Introduction an…
Best French Press Travel Mugs for Tas…
How and Why America Was Hit So Hard B…
Social Media Addiction: Issues and 7 …
GetResponse Review-How to Setup