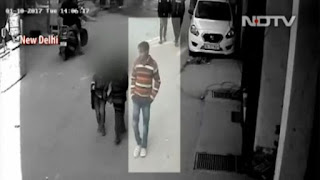 A man arrested by Indian Police has admitted sexually assaulting more than 100 young girls, preying on them as they left school at the end of the day.
Tailor Sunil Rastogi is being held on suspicion of Rape after CCTV footage allegedly backed up the complaints of some of the girls.


The 38-year-old always wore the same red striped top and jeans as he targeted girls aged between seven and 11, the Hindustan Times reported.


He is thought to taken the same train to Delhi and returned home after raping them, the paper alleged.


He is also said to have only travelled on odd-numbered dates in the month.


Deputy police commissioner Omvir Singh Bishnoi told the paper that as well as cases in Delhi, he has also admitted offences in Ghaziabad, Uttar Pradesh, and the town of Rudrapur in Uttarakhand.
"He has admitted to have attempted to sexually assault more than 100 girls since 2004," he told AFP.


"Police have registered eight cases, we are still working on it.
"He would follow girls, target one who strayed and say 'oh, I know your father. He is a good friend of mine...'


"He would lure them and take them to a secluded place," he said.


Mr Bishnoi told the Hindustan Times that Rastogi was certain police would never catch him if he always wore his striped top.


Rastogi was shown briefly on television outside a police station wearing the top. He told a reporter: "I don't know why I did it."


India has seen a number of highly publicised incidents of sexual assault and violence against women and girls.


In December 2012, a woman was gang-raped on a bus in New Delhi and later died from her injuries.


A UN Committee in 2014 said one in three rape victims in India was a child.

Wuhan Weather Report
Can I consistently feel better?
Exhibit B: Talking food and family w…
How long does it take CBD to work? Ho…
What is Considered a Dental Emergency…

What is Considered a Dental Emergency Case?