US raises key interest rate by 0.25% on strengthening economy 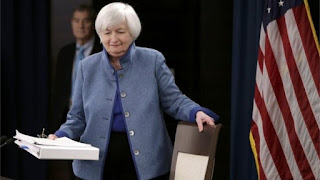 The US Federal Reserve has raised its benchmark interest Rate by 0.25%, only the second increase in a decade.
The Central Bank voted unanimously to raise the key rate to a range of 0.5% to 0.75%, citing a stronger economic growth and rising employment.


But the central bank said it expected the economy to need only "gradual" increases in the short term.


Fed chairwoman Janet Yellen said the economic outlook was "highly uncertain" and the rise was only a "modest shift".


However, the new Donald Trump administration could mean rates having to rise at a faster pace next year, she signalled at a news conference after the announcement.

The president-elect has promised policies to boost growth through tax cuts, spending and deregulation.


Ms Yellen said it was wrong to speculate on Mr Trump's economic strategy without more details.


But she added that some members of the Federal Open Markets Committee, the body which sets rates, have factored in to their forecasts an increase in spending.


As a consequence, the FOMC said it now expects three rate rises next year rather than the two that were predicted in September.

US raises key interest rate by 0.25% on strengthening economy