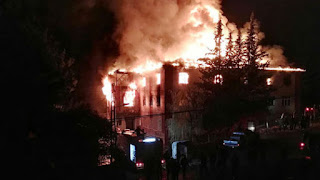 Six suspects have been arrested after 12 people - 11 Schoolgirls and a teacher - died in a Fire at a secondary school dormitory in southern Turkey.
Authorities are investigating the blaze which ripped through the sleeping quarters of the premises in Adana on Tuesday night.


The fire exit to the room was locked or could not be opened, the mayor of the city said.


Huseyin Sozlu told Turkish television that most of the dead were recovered from near the door.


A further 22 people were injured in the blaze and required hospital treatment.


The boarding school pupils were in the dormitory - which was run by a Sunni Muslim sect - because their own state-run dormitory had been demolished ahead of a rebuild.


An electrical fault has been blamed for causing the fire, which spread rapidly due to the wooden structures and carpeted floors in the building.
All of the girls were said to be under 14, with the youngest aged just four, according to the Dogan news agency.


One of those detained for "causing death by negligence" is the manager of the dormitory.


Reports said the dorm was the only option in the area for the girls' parents.


Adana governor Mahmut Demirtas said some schoolgirls managed to escape, injuring themselves as they jumped out of the window.


The US Embassy posted a message of sympathy on Twitter that read: "We are deeply saddened by news of the tragic fire in Adana and send our condolences to the families of those killed."

Everybody wants me, so when do I self…
Decorating Your Home With Library Rug…
Hunting the Hunters
Halloween Festivities
19 Easy Ways to Increase Profit Margi…