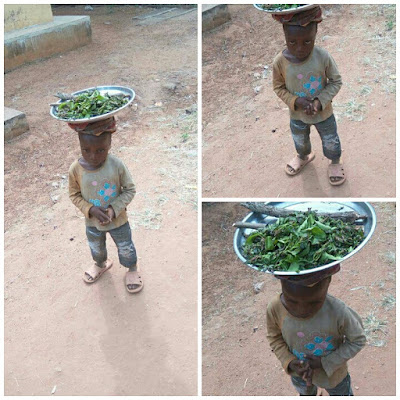 My Mentor, Father, Brother and Legal Practitioner 'Firsts Baba Isa' posted this on his facebook wall. But seriously this is pathetic, a child of this age hawking leaves on the street. The saddest thing is that the father of this child is claiming he is doing the right thing. Well, let me leave you to hands of the Barrister himself, here was his experience when he tried helping the poor little boy:

I was coming back from the Market with my wife and younger sister when I met this child hawking around Mbube Lane in Abakpa, Ogoja of Cross River State.
My heart broke into several pieces. Children hawk in this town. I have hawked on this streets too as a child. But this child was looking way too young for this.
I immediately paid (double) for the leaves he was carrying. We didn't know what kind of leaves that was so I asked him to take both the money for the leaves and the leaves home. 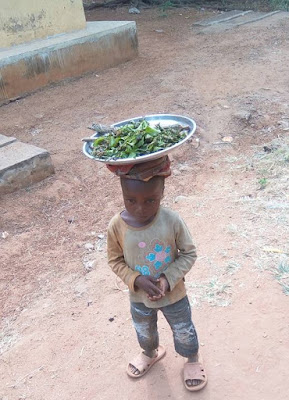 I asked my nephew to escort him home. I gave him extra Money to give to the boys parents to get him slippers or clothing; with a firm instruction that the child should not be sent to hawk again until he gets older or else I will get the child and the parents arrested whenever I see him hawking again.
The parents went ballistic. The father said he too has a lawyer and even soldier in his family and they should tell me to go to hell. He said that is how he trains his children. That he sent the child to hawk not because they lack anything. That they have enough money and the child has enough clothes.
He collected the money I paid for the leaves. Collected the leaves. And rejected the money I sent for the child's clothing on the grounds that they lack nothing. 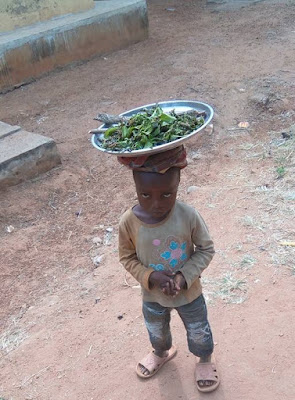 I really wanted to help this boy but the father's arrogance is preventing us from even having a meaningful talk. But I have instructed my people to be on the lookout for the child. If they ever see him hawking again, I will take legal action against the parents.
I know things are hard. But father that cannot hawk to feed his children is that one father? A child is not a bread winner of the family. 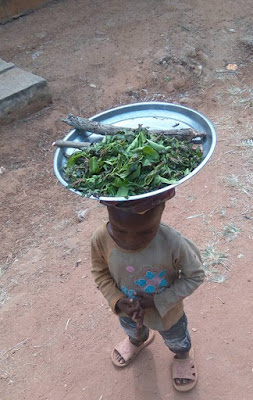