Kanye West pulled the plug on his Sacramento concert after performing just a few songs on Saturday, November 19, but not before lashing out against Beyoncé and Jay Z.

The notoriously outspoken rapper, 39, took to the stage about 90 minutes late and proceeded to perform four songs before launching into a rant about the superstar couple.

“Beyoncé, I was hurt,” the “Fade” hitmaker said, according to videos posted online. “I went down seven years on behalf of you … I am putting my career, my life, my public standing at risk when I talk to y’all like this. This is a moment in the matrix, bro. … Beyoncé, I was hurt because I hear that you said you wouldn’t perform unless you won Video of the Year over me and over ‘Hotline Bling.’ In my opinion … now don’t go dissing Beyoncé, she’s great. Taylor Swift is great. We are all great people. We are all equal. But sometimes we be playing the politics too much and forget who we are just to win.”
The "seven years" the rapper mentioned were in reference to the years following his outburst at the 2009 MTV Video Music Awards, during which he infamously interrupted Taylor Swift during her acceptance speech to insist that Beyoncé deserved the win.

West also addressed Beyoncé’s husband, Jay Z, who he called out during a show last month following his wife Kim Kardashian’s Paris robbery.
“Jay Z — call me, bruh,” he said. “You still ain’t called me. Jay Z, I know you got killers. Please don’t send them at my head.”
In clips of West’s epic diatribe, the crowd can be heard booing and cheering as he takes another jab — this time at former Democratic presidential nominee Hillary Clinton. 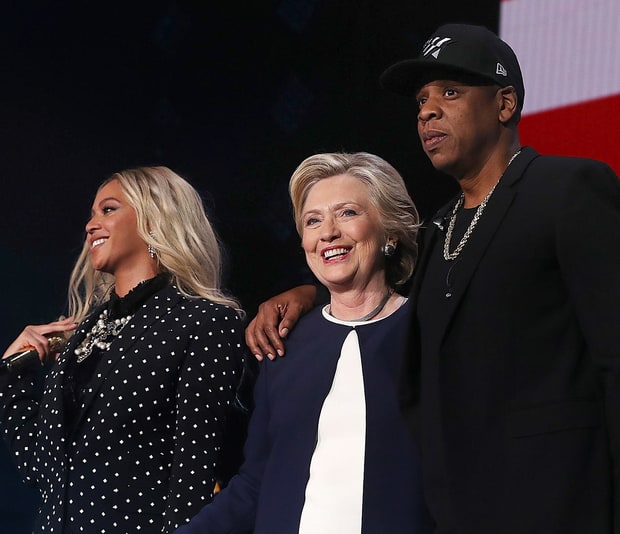 “This Saint Pablo tour is the most relevant [thing] happening,” he said. “If your old ass keeps following old models, you’ll be Hillary Clinton.” Other targets of his anger included radio stations: “Radio, f--k you! Oh yeah, I’m on my Trump s--t tonight. Radio — f--k you!”
West ended the show with a mic drop onstage after about half an hour.

At another show earlier in the week, West caused a stir when he told his fans that he didn’t cast a ballot during this presidential election, but that if he did, he would have voted for the former Apprentice host.

“I told y’all I didn’t vote, right?” he told the crowd in San Jose, California. “What I didn’t tell you … if I were to have voted I would have voted on Trump.”