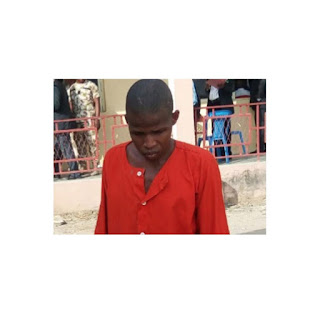 The Federal High Court in Wawa Cantonment, Kainji, Niger State, on Tuesday sentenced a commander of the Boko Haram terrorist group, Abba Umar, to 60 years imprisonment for various acts of terrorism.
According to Punchng, Umar, who was remorseless and maintained a hard look throughout the proceedings, confirmed that he would return to Sambisa Forest to continue the terrorism acts if he was ever released.
He had been in detention since 2014 after his failed Suicide Mission to a school in Gombe State that year.
Two of the five counts preferred against him attracted death penalty but the judge said he decided to impose lesser sentences after taking into consideration the age of the convict and the fact that he must have been exposed to “excessive and consistent religious indoctrination” which made him to be easily pliable.
The judge added, “For count 3, I sentence him to 60 years imprisonment. I would have been more merciful but was rather dissuaded by the convict’s insistence that he would back the activities which constitute danger to the society and for which he was apprehended.”
Umar was 18 when he was arrested after his failed attempt suicide mission to Gombe Secondary School, Gombe State, in 2014.
While testifying earlier on Tuesday, the convict who said he married two wives in Sambisa Forest after joining the sect, described himself as “an Islamic warrior, and a Commander in the Islamic army”.
He confirmed that as a commander in the Boko Haram sect, he had over 100 lieutenants under him.