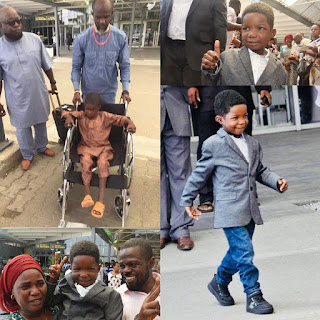 The six-year old Boko Haram victim, Ali Ahmadu, who underwent a successful spinal surgery in Dubai, returned to the country through the Nnamdi Azikiwe International Airport on Monday.
Ali was run over by Boko Haram terrorists with motorcycle when they invaded Chibok village in 2013.

Young Ali, who sustained spinal cord injury from the attack, was flown to Dubai by an NGO, Global Initiative for Peace, Love and Care ((GIPLC) in conjunction with Taleveras Group.

Hayi said the initial amount estimated for the surgery could not cover the cost at the end, saying it was not necessary to disclose the amount spent since it was a charity work.
He announced that Ali would be given scholarship by the Taleveras Foundation to study up till university level.
According to him, the Foundation’s work is hinged on the principle of love and care which it demonstrates by being its neighbours keeper as well as teaching and showing it. Via: NAN