'I Appreciate My Wife And My Girlfriend,' Footballer Makes A Blunder In Giving 'Man Of The Man Speech' 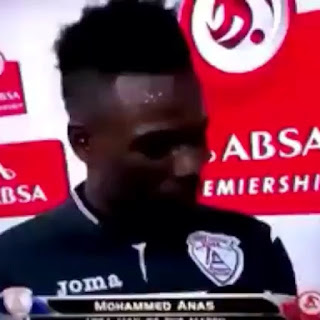 Mohammed Anas, a footballer for South African team Free State Stars made a hilarious blunder in his post-match interview in what has been dubbed the “greatest man of the match speech of all time”.
Anas scored two goals in the Stars’ 2-2 draw against Ajax Cape town, easily putting him in the Man of the Match slot for the game. As with all ceremonies after sporting matches, Anas was required to reflect on the night’s match and give a few words of thanks.

He began with thanking his fans before throwing in an eyebrow-raising curveball.
“I appreciate my fans,” he said. “(And) my wife and my girlfriend.”

COVID-19 Shelter-In-Place Polaroids
కరోనా బాధితులకు సత్య నాదెళ్ల, నితిన్ …
Three Lucky things that have happened…
كيفية التعامل سفر الزوج الطويل
Lorenzo Lotto & The Iconic Lotto Carp…
Anas stalled for a second after realising his Blunder, quickly clarifying he only had one of the two. “I’m so sorry, my wife!” he exclaimed. “I love you so much from my heart.”A

'I Appreciate My Wife And My Girlfriend,' Footballer Makes A Blunder In Giving 'Man Of The Man Speech'