Every successful person will honestly admits that failure exists. Experience has shown them it is not easy to reach the top ladder of success. No matter how smart, intelligent or brilliant you are we surely Fail in some attempts. Any failure when we attempt to achieve a goal should not be seen as the end of the road. In one of my articles I posted some months ago, in which I said failing an attempt is a mistake and it should be taken as opportunity to restrategize your plans to come out again in high success. You should not be depressed by any failing attempt, you never lose from the attempt but you rather gain experience. 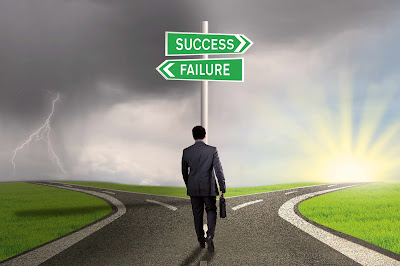 Basically, we tend to learn two major lessons from a failing attempt; the first one is that, we gain experience of why we failed while the second lesson is that we are given the chance to re-plan and rebound from that failing attempt. Generally, we see failure in different perspective and also success from different angle. However, many human beings fail because they are thinking of seven things. In other hand, some people tend to succeed too because they are thinking the opposite direction of the seven things the other people would fail think.
The question now is, why do people fail? The following five points to be analysed below are reasons why many people fail. However, these same five reasons can use to fix this ugly failure and turn it to success.
The following five (5) reasons are the causes of failure also the solutions to turn it to success.
1.     Dismissal of Past Mistakes
Human beings are different in dealing with situation. Some people stumble and just feel that’s all while some people live to know why, that is, they would like to know reasons why they stumbled? You have to see mistakes as lessons, laugh themoff and move on. Failure is a teacher whenever we have the right attitude. Wise people learn from their mistakes and tend to title this failing attempt as experience. This experience widens their knowledge, sharpen their brains and shine their visions.
Some people fail because they fail to learn from the past mistakes, they dismiss the past mistakes and again fall in the same pitfall in the future. However, some people analyse the past mistakes, learn from them, restrategize and plan to achieve their goals.
2.     Low Self-Esteem
One of the traits of successful people is that they have high self-esteem and high level of confidence. Low self esteem is a lack of self-respect and self-worth. Whoever has low level of self-esteem tend to worthless himself or herself. With low level of self-esteem you can take up any challenge then your success rate will be at minimal. Don't tag yourself with a low level of this trait because it breaks you down. Though, you might fail an attempt now but that should not be the end. You are only a failure when stop you trying. The time is now my reader, believe in yourself that you can make it in life.
3. Lack of Discipline
Discipline is one of the major tools you need to succeed in life. Those successful people achieved whatsoever they have achieved because they take discipline as a worthy tool.  The fact is that you can never achieve anything without discipline. Discipline encompasses many things but it depends on what view you take a look at discipline. No matter the level of your discipline, you must be focused, determined, self-control, avoid distractions and sacrifice. To achieve success in life you have to sacrifice a lot.
Don't be a perfectionist. You might have an idealized perspective of what success will look and feel like. Although that can be motivational, it might not be realistic. Succeeding at one goal won't eliminate your entire problems. Be manifest on what will fulfill your objectives and don't obsess about superficial details.

4.     Insufficient Persistence and Perseverance
To achieve anything in this life you need to be persistent. Perseverance and persistence have been where many people’s plan hit the bedrock. More people fail not because they lack knowledge or talent but because they just give up. It's important to remember two words: persistence and perseverance. Persist in what must be done and resist what ought not to be achieved.
Try new approaches. Persistence is important, but repeating the same actions again and again, hoping that this time you'll do well, probably won't get you any closer to your objective. Look at your previous unsuccessful efforts and decide what things to change. Keep making adjustments and corrections, using your experience as a guide.
5.     Fatalistic Attitude
A fatalistic attitude prevents people from accepting responsibility for position in life. They feature success and failure to luck. They resign themselves to their fate, irrespective of their efforts, that whatever has to happen will happen anyway.
This is false belief that whatever will happen would surely happen. This belief makes you not to thrive for success and makes you a lazy one. It is because you belief even without you pushing hard, working hard or sacrifice anything you will surely get what you deserve.
Try looking in the mirror every day and say, I am in charge. You might not have control of every phase of your life, but you have more control than you realize, and you are accountable for your own happiness and success.