Here we are at the last post of the week with the wonderful new Truva by Universal Yarn.

It’s been wonderful using this cotton and cashmere blended yarn to create different knitting designs and see how versatile it is. The lace design I knitted for yesterday’s post exceeded my expectations! 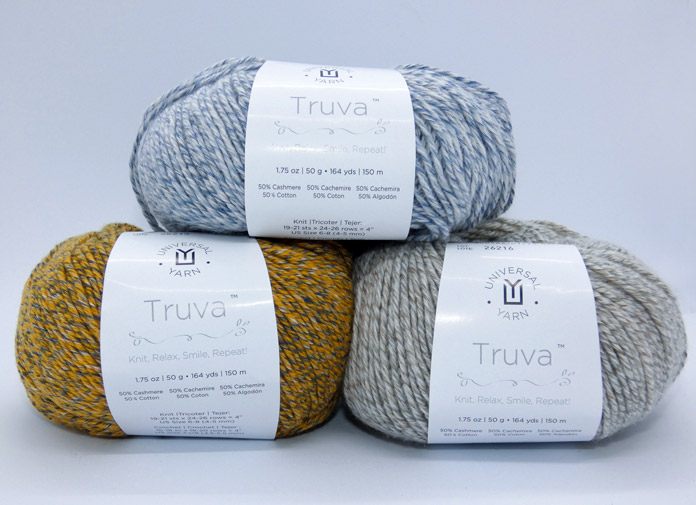 Someone asked, or rather challenged me a while ago to create a project where they didn’t have to count the rows between the cables. When I started working with Truva by Universal Yarn in my first post, Knitting with the NEW TRUVA Universal Yarn is TRULY luxurious I decided to try this challenge out by knitting a chemo cap in the round. The heathery tones of Truva make a more subtle yarn, well suited to an all-over cable pattern.

Truva’s unusual blend of cotton and cashmere fibers makes it very soft, and the fact that it has little elasticity means it’ll be even more gentle on patients who have lost their hair due to chemo treatments. This is a great way to try out this new-to-me yarn and end up with something to donate to a worthy cause.

This cap is knitted from the top down in the round, so it will appeal to no-sew knitters.

I tested my no-count cable challenge on flat knitting, too, and have included a small swatch for that as well. This could be applied to an all-over textured sweater.

The flat swatch is worked in the color Medallion with size 6 [4mm] straight needles. The cables are the same as for the hat: 4 stitch cables, crossed behind to form a right twist. The pattern repeats every 15 stitches and every 6 rows. The cables step to the left on every pattern row. This stepping makes it possible to work the pattern without counting the rows between each twist.

My tension on this piece measured 28 sts to 4” over the cable pattern.

Repeat Rows 2 through 7 for desired length. 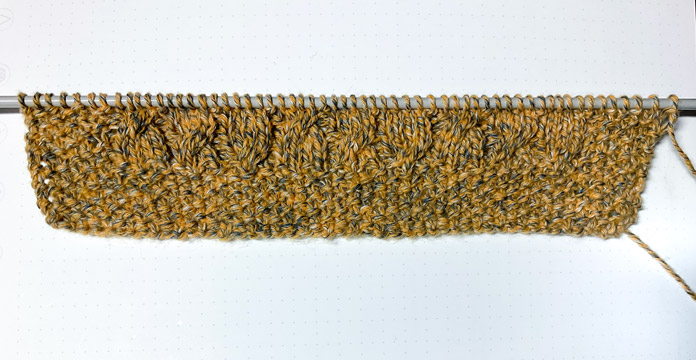 Once the first repeat is complete, the knitter can ‘read’ the pattern. When the third cable twists nearest to the needle, the next right side row cables twist on the first cable, and so on.

As I work these cables, I can feel the twist from the cable worked on the second last row (or round). I use this as a tactile cue that the next four knit stitches will need the cable needle.

The entire center panel of this sample, shown below, (after the first repeat of cables) was done while I socialized at a knitting gathering – no rows were counted! To block this sample, I pinned it out slightly on my wool pressing pad, gave it several shots of steam from my steam iron, then left it to dry. 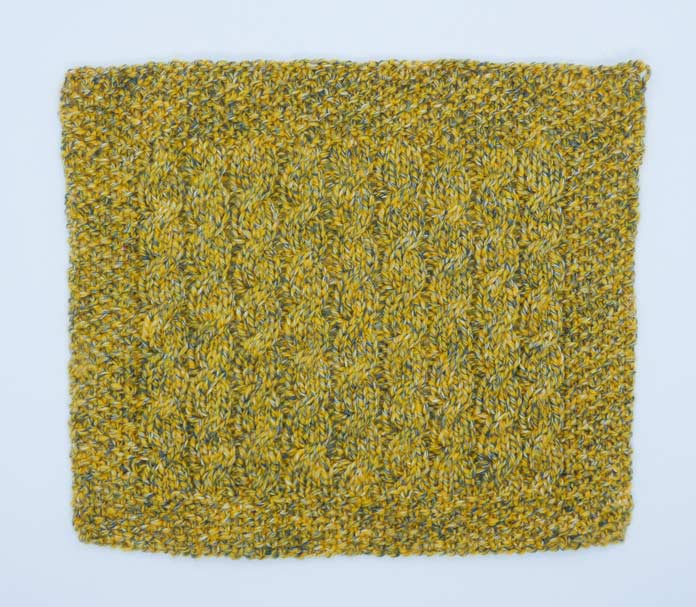 The hat pattern has two options for the brim. On the gray one, I carried the cables down into the bottom band, incorporating them into the ribbing until the third cable of the repeat was complete. On the mandarin hat, I changed to larger needles twice and carried the cable pattern to the bottom edge of the hat to make the cables flare out and form the brim. To give the cast-off an extra bit of structure, I added a second strand of yarn and worked the cast off with two strands and the largest needles. 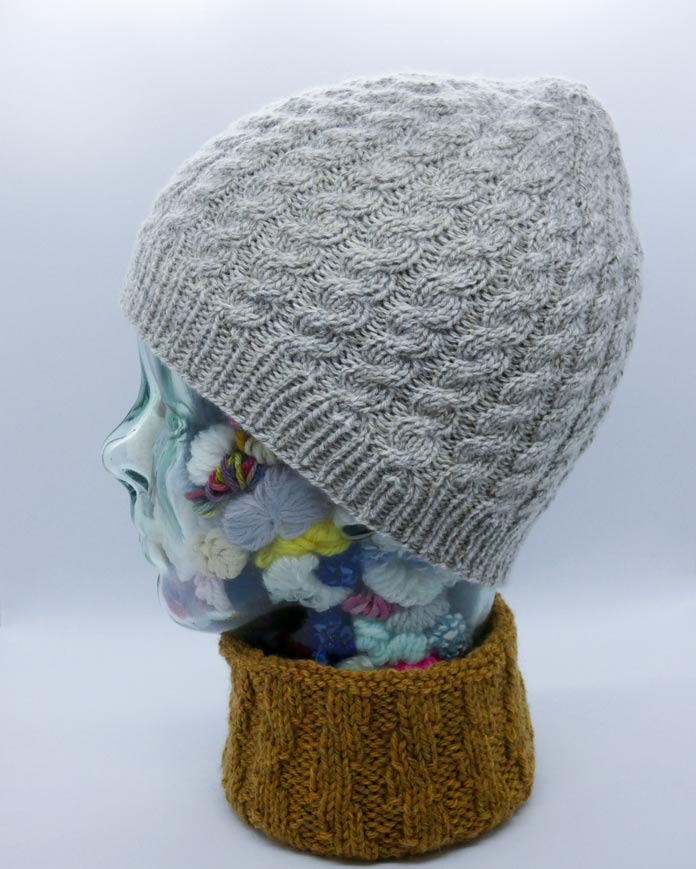 The effect is subtle, but the cables continue twisting into the first few rows of the ribbed brim. This cap weighs exactly 48 grams, so it’s a squeaker for using up a full ball of yarn.

In the interest of full disclosure, for the cloche brim, I needed about 10 yards of yarn from a second ball, so 3 balls of Truva make two chemo caps.

This no-count cable challenge was very successful. I knitted one entire cloche hat while binge-watching an Italian drama series with English subtitles. And I had to read those subtitles because my Italian isn’t that good!

Kfb – knit into the front and back legs of the same stitch.

M1 – lift the bar from the space between the stitches on the left and right needle, place the bar over the left needle so the left end of the bar is behind it and the right of the bar in front, knit the bar through the back of the loop.

Cast on 4 sts onto one dpn, slide sts to the opposite end as for an i-cord. 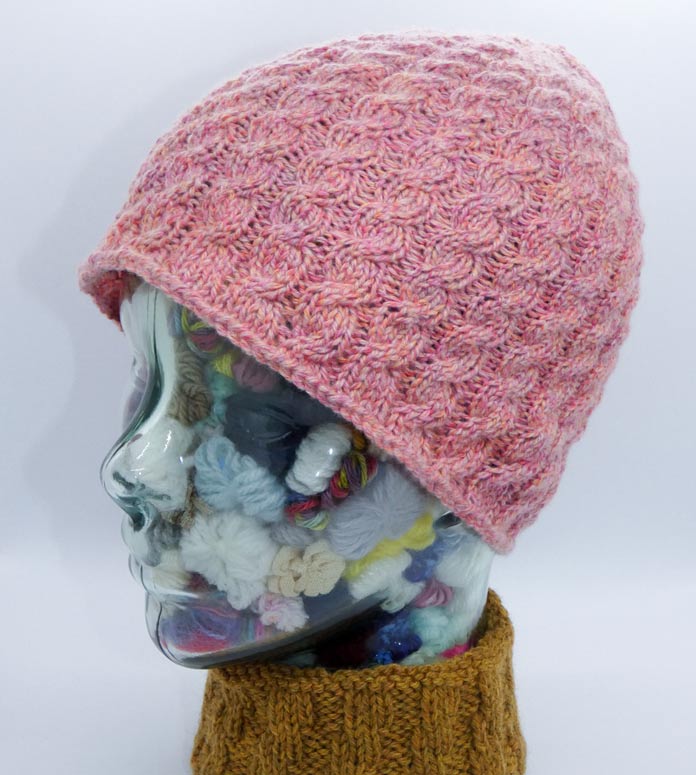 Changing needle sizes gives the brim of the hat a soft, bucket-style flare that flatters many face shapes.

It would be great if we could all buy some Truva and create a wave of donations to our local cancer centers! 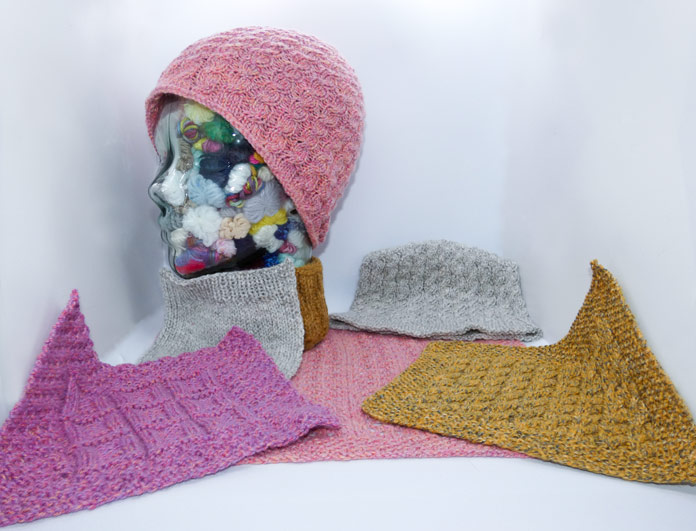 So, that’s a wrap for this week. Hope you’ve enjoyed seeing the many designs you can knit with the new Truva Universal yarn, and how plentiful the possibilities are.

From the editor: Here is a very informative post with more knitting ideas, including crochet and quilting, Decorate Your Home with Crochet, Knitting, and Quilting: The Experts Tell Us How to Do It

This is part 5 of 5 in this series

This post first appeared on KNITmuch - To Knit Is To Love..., please read the originial post: here
People also like
Angels Landing at Zions
Vivo Launches Budget 5G Smartphone, Y30 5G
Beginner Art: Acrylics vs. Oils, Watercolors
Aigostar – 10% discount for New Customers
All You Need to Know Before Heading to Scotland, Things to Do, Not to Do, and Brilliant Advice
PHOTOS: Kidnappers of Greenfield University, Bethel Baptist School students arrested
What would happen to a modern-day Moses in America?
The A500 Mini Review