Bruce Threlkeld is one hell of a musician. I can’t believe I used to jam with him in an upstairs rec room as kids.

Yeah, Bruce and I are longtime friends. Oh, sure, we haven’t seen each other in a really, really long time. But I am of the belief that we still understand each other's essence of spirit. At least I believe I get his. Not sure there’s anybody who truly comprehends my own. 😉

Bruce has a new music performance video out. It’s his first ever produced for the general public. I talked with him about it, and about his remarkable life in music.

WhenI wasfive orsix yearsold, I’dput ona Beatlesor Monkeysalbum and jam along. I’d either be beating on an upside down mop bucket orstrumming a tennis racquet. I couldn’t decide whether to play drums or guitar, but eventually I did both, and picked up a few other instrumentsalong theway.

The “Right as Rain” adventure began in college when I started giggingwith my friend, Rick Taylor, whom I met my freshman year (at Florida’s Rollins College) when wewere both learning banjo. Rick and I played as a duo and in band settingsfor fouror fiveyears beforerecruiting thelineup thateventually became “Right as Rain” in 1986. We initially released a four-song EP, and then were signed to the well-respected indie label DB Records out ofAtlanta. Wedid two albums forDB.

Playing with “Right as Rain” gave me an opportunity to travel and to getfamiliar with the “College Circuit”— a loose term describing the network of venues, usually located in proximity to a college oruniversity,thatoften bookedand promotedIndie bands.At thetime, thiswas perhaps the best opportunity for “Right As Rain” to attract new fans, do radio interviews, sell merchandise, and live “the dream,” which, inreality, consisted of traveling long distances on little sleep, food or money. We did attract some interest from major labels, but were neversigned, despite numerous showcase gigs including memorableperformances at CBGB, the South by Southwest Music Festival and a few other venues which are long gone. The traveling and the giggingwere educational, to be sure, but eventually I grew restless and tired of chasing the dream. I left the band in 1991, but Rick and I remain closefriends, andwe teachand gigtogether occasionally.

The video idea was something I’d toyed with for a few years, mainly bycutting a few technical lesson tutorials and short snippets of popular songs primarily from a teaching standpoint, and posting them on myYouTube channel, The Gig Farmer. When COVID hit, I knew it was time to get serious about becoming familiar with streaming platforms,videography, cameras, mics, etc., in order to keep my lesson revenue coming in. I began teaching on ZOOM and I made some more “produced”teaching tutorials covering drums, guitar, banjo and ukulele. I got better atediting withFinal CutPro, so Idecided thenext stepwould beto perform full “stage” versions of some of the songs, the collection of whichI callThePerformanceSeries. I’mstill verymuch inthe midstof asteep learning curve when it comes to making videos, but I’ve had some new song ideas over the past few years and I figured that theperformance videos would be a good way to showcase those songs. I playall theinstruments onthe songs,so it’sa funchallenge topiece itall together by multi-tracking, starting with a rhythm guitar and scratch vocal,and addingdrums, bass,lead guitar,and whateverelse seemsto fitwith the song.

Music continues to satisfy my creative bent, whether I’m teaching agroup of youngsters how to play their first notes on a guitar, or performingmyfour-thousand-and-umpteenthgig (Iwish I’dkept count).There’s always something to gain and learn from these experiences and I pray that I’ll be able to continue to play and teach for as long as I’m able tohold a pick,strum alick, or swing thesticks.

Thanks, Bruce. I think “The Muse” is gonna enchant for some time to come here, pardner.

"By turns light and haunting, this stunning collection makes for a page-turner." 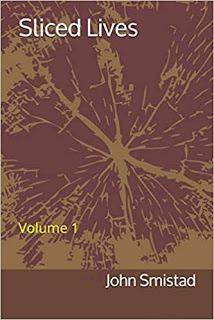 One of these stories IS about YOU.
No kidding.
So say the reviews...
"Very edgy, somewhat raunchy, and very real."
"I guarantee one, if not a handful of these shorts, will resonate with you."
"Sliced Lives", a very different kind of "Slice of life" short story collection. Available on amazon both in Paperback and on Kindle at this link:
Sliced Lives: Volume 1: Smistad, John, Smistad, Jane Christie: 9798550676059: Amazon.com: Books