Marks On The Palm | The Star | Meaning Of Star On Fingers, Mounts & Lines Of Hand Palmistry 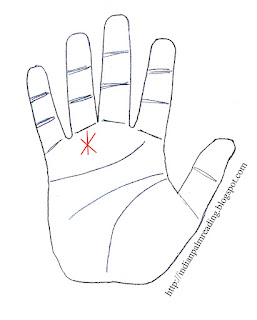 2. The effect of a star is reduced if it is available on the line or a parallel line run nearby star.

3. A star on the mount of Jupiter indicates head injury, throat surgery and death by sticking of some eatable in the throat.

4. If the star is found on mount of Saturn, it is an indication of paralysis, trouble of spinal cord, danger from fire, electricity or bullet. Injury may also occur due to fall.

5. Stars on the 3rd phalange of Saturn fingers of both hands indicate death due to suicide or drowning.

6. A star at the root of Saturn finger indicates sterility of wife.

7. A star on the 2nd phalange of Saturn finger indicates insanity.

8. A star on the mount of mercury shows danger of poisoning.

9. If the star is on the mount of Moon, then danger of drowning, jaundice, paralysis, mental shock and suicidal tendency.

10. A star on the fate line, indicates the death of partner due to unhappy married life.

12. Stars on the life line on both hands, indicate vanishing of whole family.

13. A star on the heart line between mount of Apollo and Mercury, indicates heart
trouble.

14. Loss of memory and mental paralysis, if star is situated on the terminal of head line.

15. A star on the mount of Mars is the indication of death due to accident.

16.  A star on the mount of Venus on both hands, causes loss of vitality.

17.  A star on the mount of Mars shows the accidental death and unhappy married life.

How to Make Number 13 to Your Lucky N…
CBD Capsules Or CBD Oil Tinctures: Wh…
Hemp Land USA Review
8 Places to Drink Coffee in KC that …
Change your life joining the Wish Par…

Marks On The Palm | The Star | Meaning Of Star On Fingers, Mounts & Lines Of Hand Palmistry